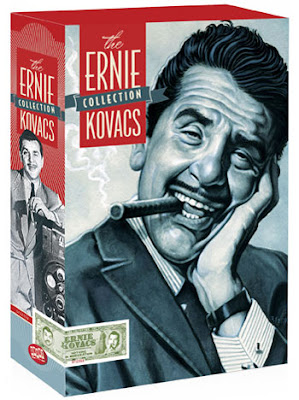 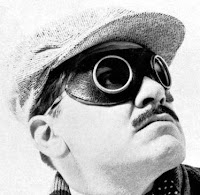 (Image by Unknown Owner)   Details   DMCA
"There's a standard formula for success in the entertainment medium, and that is 'Beat it to death if it succeeds.'"

It isn't often that I stray from the subject of the train-wreck of our political discourse and drift into the field of American popular culture. But I'm almost certain you will l forgive me if I make an exception for Ernie Kovacs.

We all came together at the Paley Center in New York City on April 12, 2011 - one week ago tonight - to pay tribute to a man who has been called (with no exagge ration) "Television's Original Genius". The event, which was hosted by Keith Olbermann was set to herald the release today of a six-DVD retrospective of the tragically-brief career of this extraordinary talent. The release of The Ernie Kovacs Collection is reason to celebrate - and I'm celebrating - trust me. 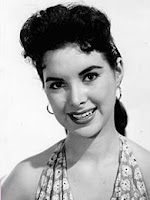 (Image by Unknown Owner)   Details   DMCA
one who reads this site with any degree of regularity must have figured out by now, I am a huge fan of Keith Olbermann. During his eight-year run as host of MSNBC's Countdown , I rarely missed a broadcast. Yet when the evening was over and the participants in the discussion were mulling about underneath the giant video screen in front of the stage, I walked right past the guy. No offense, Keith, but I just had to introduce myself to Jolene Brand (photo on the left). She was there with her husband, the producer (and creator of Laugh In ) George Schlatter - or as we inhabitants of Kovacsland fondly refer to him, "Mr. Jolene Brand". It can be said that Jolene was Edna Purviance to Ernie's Charlie Chaplin, and a vital presence on the Kovacs program for the last three years of his life. Fifty years later, she is still a heart breaker - and a lovely human being. She promised me that she would read this review. HI, JOLENE!

(Image by Unknown Owner)   Details   DMCA
e absence from the evening's festivities (besides Ernie of course) was Edie Adams who passed away three years ago. She was the woman who stuck by Ernie through thick and gaunt, and who saved the videotapes and kinescopes in this beautiful collection from being destroyed by foolish network executives. Had it not been for this smart and savvy woman, it is doubtful that Ernie's legacy would have survived at all. Incredibly, a few years after he died, in an effort to make space in a Manhattan film storage facility, untold hours of films from Ernie's Dumont Network period were dumped into the East River. Can you imagine?

I spoke to Edie on the telephone one night in 1986. She was playing in the King Cole Room at the Fairmont Hotel and graciously took my call. I told her that Ernie's NBC special from May 1959, "Kovacs on Music", was beyond brilliant. I remember practically begging her to release it on video. She told me, "I will someday, Tom, I promise you". That program is contained in this DVD collection. Thanks, Edie! Give Ernie a hug for me, will you?

"He played with the medium of television in a way no one ever had before."


In the early 1950s an article was written called, "Kovacs Hates TV". This doesn't surprise me in the least. Radicals are seldom satisfied with things as they are - and Ernie was about as radical as they come. He changed everything. At a time when no one knew what to do with the new invention of videotape, Ernie Kovacs made it sing and dance. He was no mere, run-of-the-mill fifties television comedian. He was in fact the world's very first video artist - incredible when you consider the fact that the term "video art" did not come into existence until 1966, four years after his passing. Even now, despite a half-century of video's technological evolution, Ernie's work still astounds. 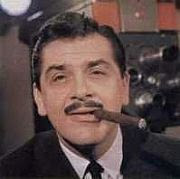 (Image by Unknown Owner)   Details   DMCA
o astonishing is that - in his time - he was not a resounding success. Although the television audiences of the 1950s liked Ernie Kovacs (How could anyone not like Ernie Kovacs?) they were somewhat puzzled by him. About ten years ago his work was featured on a cable television series whose title speaks volumes: "Brilliant But Canceled." As hard as this might be to believe, it is the absolute truth: During his lifetime he was never as popular with the public as Milton Berle.... Milton Berle! Can you believe that? (I am sorely tempted here to make an analogy to anyone who ever lost an election to George W. Bush, but I'll resist). It would take decades of hindsight for the public to truly appreciate how unique Ernie was. Sadly, that appreciation would be posthumous.

Late on the rainy night of Janu 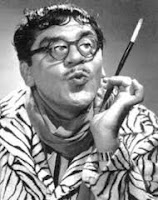 (Image by Unknown Owner)   Details   DMCA
ary 13, 1962, Ernie Kovacs was returning home from a party when he lost control of the Corvair station wagon he was driving and crashed it, wrapping the driver's side of the vehicle around the concrete base of a utility pole. He was killed instantly. Ten days later, on what would have been his forty-third birthday, ABC Television aired Ernie's last program which he had been working on right up until the night he died. Of the entire series of monthly half-hour specials he had been doing in the last year of his life, this final program was one of the best. At the end of the broadcast, the reverend who presided over Ernie's funeral was quoted:

"We loved this man. He brought joy, gaiety and laughter to the world. He was a rugged individualist and a creative genius. But he was always ready to listen, and slow to judge ." 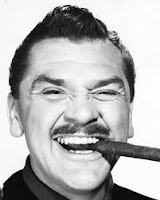 (Image by Unknown Owner)   Details   DMCA
ovacs was a visionary. He was the first to realize that great art could be created within the nineteen-inch confines of an ugly box with a glass tube at its center. Unfortunately for humanity, he's gone and he's not coming back. Thank God for Edie Adams, Because she had the foresight to save her husband's work, we now have these kinescopes and videotapes to gently remind us what once was. Ernie's world was a delightful, wondrous and riotous place to enter. Someone once remarked, "In an ocean of noise, this island of quiet genius was typical of Ernie Kovacs." Indeed it was.

Early in his career, he would close his programs by telling the audience at home, "It's been real!," a phrase he coined. He was a bit of a paradox in that respect. Ernie Kovacs was the real deal alright - and television's first surrealist. Go figure.

Just in case I didn't make it abundantly clear in this piece, I highly recommend the Ernie Kovacs Collection. The set is being distributed by The Shout Factory. If you order it from their website, you will receive a seventh, bonus DVD absolutely free ( How cool is that??? ) Here's a link to order:

Tom Degan is a former Green Party candidate for New York State Senate. He writes on a blogsite called, The Rant by Tom Degan. He is the recipient of the Presidential Medal of Freedom.....Okay, he didn't really receive the Presidential Medal of (more...)
Related Topic(s): Death; Television, Add Tags
Add to My Group(s)
Go To Commenting
The views expressed herein are the sole responsibility of the author and do not necessarily reflect those of this website or its editors.