New Alabama Governor Robert Bentley has said that he wants to clean up the culture of Montgomery. That will be quite a task because Bentley's predecessor, fellow Republican Bob Riley, spent eight years turning our capital into one of the most toxic political environments in the country.

Thankfully, a new movie shines considerable light on how Riley and his GOP cronies turned Montgomery, Alabama, into a sleaze pit. Casino Jack, starring Oscar winner Kevin Spacey, was released in late December and now is playing in select cities. We hope it soon will be showing in theaters across the country. It focuses on GOP felon Jack Abramoff and is must viewing for any American who wants to understand, at least in part, how our country went off the tracks in the George W. Bush years.

The film should be of special interest here in Alabama, given Riley's documented ties to Abramoff and his fellow felon, Michael Scanlon. According to early reviews, the film portrays Scanlon as perhaps even more despicable than Abramoff. The mainstream press, curiously, seems to rarely mention that Scanlon used to work for Bob Riley.

George Hickenlooper, perhaps best know for the the   documentary Hearts of Darkness,  directed Casino Jack. Hickenlooper died last October, at age 47, roughly two months before his latest work was to premier. Authorities in Colorado ruled that Hickenlooper died from an accidental overdose involving a painkiller and alcohol.

We should mention that Casino Jack  is not to be confused with Casino Jack and the United States of Money, a documentary by Alex Gibney that was released earlier in 2010. How did the Abramoff scandal affect the political culture in Alabama? Perhaps it is best summed up in this screen shot from the documentary. Notice in the chart superimposed over the photo that Alabama Governor Bob Rileys' name is front and center, right under that of the felon himself: 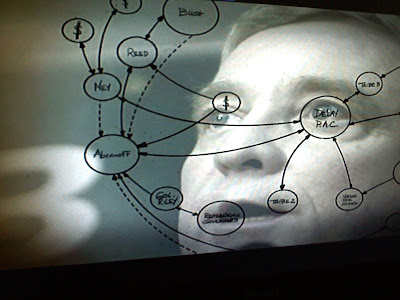 From Casino Jack and the United States of Money

In May 2010, The New York Times gave the documentary a fairly positive review, although it said Gibney was hampered by taking on such a sprawling subject:

I live in Birmingham, Alabama, and work in higher education. I became interested in justice-related issues after experiencing gross judicial corruption in Alabama state courts. This corruption has a strong political component. The corrupt judges are (more...)
Related Topic(s): Corruption; Movies; Scandal; State Government; State Governor, Add Tags
Add to My Group(s)
Go To Commenting
The views expressed herein are the sole responsibility of the author and do not necessarily reflect those of this website or its editors.