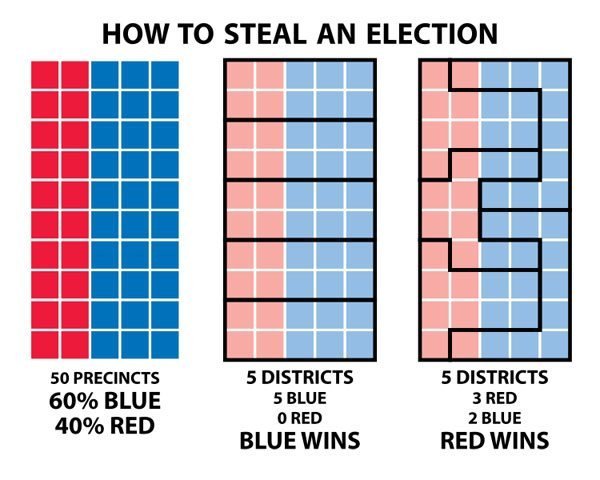 The gerrymander in Red-States is at hideous proportions and with that, they've distorted our democracy. The laws that are passed, appointments, and judges selected are anathema to the people they serve.

A caller initially suggest we cave to the gerrymander

A caller to Politics Done Right was adamant about the senselessness of voting in our gerrymandered congressional districts. I made the case why proactivity and engagement can make gerrymandering moot.

I told the caller that I live in a very red district. My goal is not to continue speaking solely to people who agree with my Progressive point of view. That is pointless since it does not expand our base.

For some time, with a fairly positive level of success, I engage neighbors who have developed a trust in me and expanded the conversation to politics. I make it clear I am not trying to change their political affiliation. It gives a certain degree of leverage.

What many people on all sides fail to see are too many times ones political affiliation is their identity, their religions. What I try to do is give them the freedom to hold onto their core political party belief at the same time voting their interest. In other words, I am not asking them not to a Republican but to remember when they go into that booth only they and God knows their vote. More importantly, that vote can determine both their children and their futures.

Related Topic(s): Voting, Add Tags
Add to My Group(s)
Go To Commenting
The views expressed herein are the sole responsibility of the author and do not necessarily reflect those of this website or its editors.