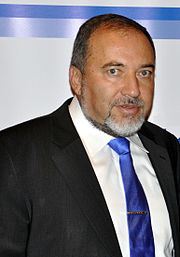 Launched this month, as much of the world was on holiday, Avigdor Lieberman's plan for the Palestinians -- retooling Israel's occupation -- received less attention than it should.

Defense minister since May, Mr Lieberman has been itching to accelerate Israel's annexation by stealth of the West Bank.

His "carrot and stick" plan has three components. First, he intends to sideline the Palestinian Authority in favor of a new local leadership of "notables" hand-picked by Israel.

Preferring to "cut out the middle man," in his words, he will open a dialogue with supposedly more responsible Palestinians -- business people, academics and mayors.

Next, he has established a new communications unit that will speak in Arabic over the heads of the PA in the West Bank and its Hamas rivals in Gaza directly to ordinary Palestinians.

An online campaign -- budgeted at $2.6 million (Dh9.5m) -- will seek to convince them of Israel's good intentions. The Palestinians' problems, according to Mr Lieberman, derive from corrupt and inciteful national leaderships, not the occupation.

And finally, his defense ministry will produce a map of the West Bank marking in green and red the areas where, respectively, "good" and "bad" Palestinians live. Collective punishment will be stepped up in towns and villages in red areas, from which Palestinian attacks have been launched. Presumably night raids and house demolitions will increase, while closures will further curtail freedom of movement.

Palestinians in green areas will reap economic rewards for their good behavior. They will be given work permits in Israel and the settlements, and benefit from development projects, including the creation of Israeli-controlled industrial zones.

It sounds like the musings of a 19th century colonial official on how best to prevent the natives turning restless. Ahmed Majdalani, an adviser to Mahmoud Abbas, told the Haaretz newspaper the new arrangements assumed Palestinans were "stupid and lacking self-respect" and could be "bought with economic perks."

Mr Lieberman's longer-term goal is to persuade Palestinians -- and the international community -- that their aspirations for self-determination are unattainable and not realistic.

Related Topic(s): Hamas; Israel; Israel And Palestine; Israeli Attacks On Gaza, Add Tags
Add to My Group(s)
Go To Commenting
The views expressed herein are the sole responsibility of the author and do not necessarily reflect those of this website or its editors.