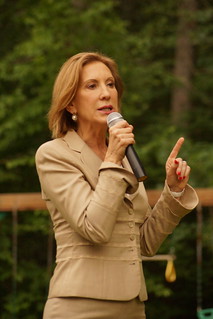 If you doubt that the politics of identity have triumphed over the debate over ideas, read today's New York Times story about how "Carly Fiorina Both Repels and Enthralls Liberal Feminists."

Identity politics is the marketing of and resulting support of candidates based upon their historically underprivileged status. Never mind what I believe or claim I'll do if I win. Vote for me, gay males, because I am one of you! Vote for me, black women, because it's time for a black woman!

Also: vote for me, black men, because I'm black (and also a woman).

Or: vote for me, white liberals, because I'll heal the rifts of sexism and/or racism.

Barack Obama is the patron saint of modern identity politics. Though not black in a typical American sense, which indicates slave ancestry, Obama swept to victory twice, and enjoyed remarkable deference from the media, because he was black enough to serve as a symbol of racial reconciliation. Identity politics is how he convinced most Democrats to vote for him and do so enthusiastically -- this despite a conservative voting record and politics that would have been at home in any of several Republican administrations. Obama's ideas -- expanding NSA surveillance of American civilians, drone assassinations of thousands of innocent people, reducing Libya and Syria to failed states -- are anathema to those who voted for him, but he was (sort of) black, so they did anyway.

This campaign season, it's the women's turn.

Hillary Clinton's conservative politics and ideas and performance are overlooked by the vast majority of her liberal supporters because she's a woman, and there needs to be a woman president, and if she falls short of victory, who is the next woman capable of pulling it off?

As the Times notes, feminists -- most of whom are, by definition, politically liberal or progressive -- are confused by the disconnect between Carly Fiorina's projection of strong, competent womanness, and her retrograde right-wing politics. "Can you love a campaign but hate a candidate's politics?" the paper quotes self-described feminist writer Robin Marty, writing for Consmopolitan's website. I dunno, Robin -- can you be a feminist and still write for a rag that makes millions by reselling the same tired list of cheap orgasm tricks? Can I admire Adolf Hitler's design sense while mourning the fact that no one managed to assassinate him?

In the crucible of the 1970s, identity politics had its place. Where would feminism have been without the identifier of Ms. Magazine? Trans people, the latest to step out of the shadows of historical marginalization and oppression, have gotten where they are today via an identity politics that, first things first, made it OK to be proud of who and what you are.

But that was then and this is now. Now identity politics is all identity, no politics, all image, no substance.

Erin Gloria Ryan of Jezebel's quotes illustrate the bankruptcy of identity politics. "Carly Fiorina is an ice-cold shade queen debate princess and I'm in love with and terrified of her," she tweeted. Would a resident of Waziristan write: "Barack Obama is an ice-cold drone killer and I'm in love with his suits but not so much into being droned?" No. He would not. Because a resident of Waziristan is connected to his class interests. Because he is scared of, and disgusted by, Obama's drones, he cannot appreciate the way the president cuts a fine figure in a suit.

It's of course ridiculous when you think about it, but it really does come down to aesthetics for Ryan: Fiorina, she says, is "contrary to the conservative female narrative, the way she looks, the way she presents herself, the no-nonsense businesswoman thing." For this generation of image feminists, Fiorina is seductive because cuts a fine figure in a high-end corporate outfit and refuses to absorb Donald Trump's cheap shots at her looks. Too bad she wants to tell pregnant teenagers tough beans, they have to have the baby -- and that she brazenly lied about a purported Planned Parenthood "harvest the brain" video.

Marty compares "liberal" feminist interest in Fiorina to eating at McDonald's: "You know, inherently, it's not something you should be eating. But when there's nothing else around, it's what you go and take."

That's so wrong in so many ways.

In the 2016 presidential race, there is another woman running. I think Hillary's politics are repugnant. There is no way I'd vote for her. But if you roll lesser-evil style, she's obviously better from a progressive viewpoint than Carly -- like going to Wendy's instead of Mickey D's.

Related Topic(s): Carly Fiorina; Feminism; Politics; Women, Add Tags
Add to My Group(s)
Go To Commenting
The views expressed herein are the sole responsibility of the author and do not necessarily reflect those of this website or its editors.