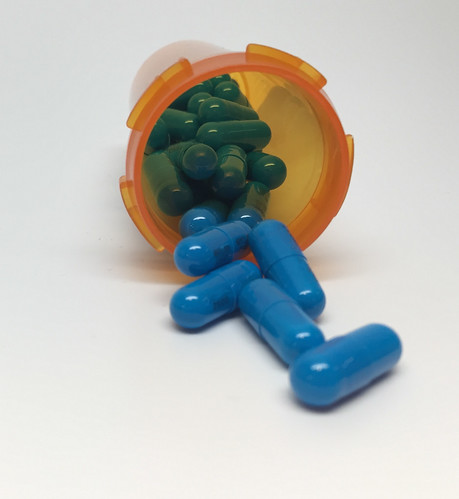 We often see that some prescription and over-the-counter medications, as well as many supplements, are encased in capsules. For many of us these may seem more appealing compared to the tablets, that can somewhat dissolve in our saliva and yield an unpleasant, bitter taste.

Knowing how useful probiotics could be, one day I gave my son two capsules. As observant as he is, sometimes, he questioned me right-away: "Mom, it's not quite healthy to drink water from plastic bottles, but it's OK to swallow these plastic capsules altogether?" Little did he know that I had replaced the plastic capsules shells with non-plastic, gelatin-made ones. I explained my reasons to him and I'll explain again here.

The hard-shelled capsules, as you'll see if you check the ingredient lists, can be of two types: gelatin and vegetable. But the so-called vegetable capsules usually are not really vegetable, just as good a name for most of them could be "plastic capsules." Being called vegetable, veggie, vegetarian, and sometimes cellulose capsules, is often misleading for consumers. Although it's true that one of their main components is cellulose, the other is a petroleum derivative.

To get a bit more technical just for clarity, the material for the vegetable capsules it's a polymer produced by reacting cellulose fibers with propylene oxidenothing vegan about this one! The substance resulting from this reaction is called hydroxypropyl methylcellulose or hypromellose. This chemical name is often included in brackets next to vegetarian capsules. The same propylene oxide is used to produce plastic #5, also known as polypropylene.

The denomination for the capsules produced using propylene oxide as "vegetable" is not correct, I think, even if it seems more appealing. Sometimes on the ingredient lists there may be more distracting details about the cellulose source (like "pine tree cellulose," which is better than cotton-derived cellulose fiberssince cotton crops are heavily sprayed with pesticides). Whatever the cellulose source is, it still doesn't make these capsules non-chemical. Hypromellose capsules can be plain, but can also contain additional preservatives, artificial colors (many being allergy triggers), sodium lauryl sulfate (SLS), carrageenan, and other excipients.

Hypromelloses are incorporated in numerous other tablets, however the amount in the capsule shells is higher than what's mixed in tablets' composition. Since I'm already on the topic of hydroxypropyl methylcellulose (HPMC)/hypromellose, I want to point out two more related substances obtained from reacting cellulose with petroleum-derived chemicals, namely hydroxypropyl cellulose (HPC) and carboxymethyl cellulose (CMC)also known as croscarmellose. They are all generically called semi-synthetic celluloses and are included in numerous medications as inactive ingredients, and as additives in foods.

They are part of a bigger group of chemicals classified "generally recognized as safe "GRAS" but, based on my experience, I have many doubts that they are. I explained about many of them in the book. The discussion about their safety usually focuses on the fact that the amounts consumed are too low to pose health problems. They're actually not that low, being included in numerous products; thus far, I don't think we know their full impact on our health either. For the chemical reactions, it is true that the newly formed products have different properties compared with the chemical parent-components. However, if one looks closer, contaminants and impurities from the manufacturing process are often detected in the final products that reach the consumers.

Suffering of autoimmune arthritis, I realized that certain chemicals incorporated in everyday products made my joints feel worse. At some point, my focus wasn't propylene oxide, but it appeared that I felt less stiffness during the days when I forgot to take the probiotic "vegetable" capsules. After learning how they were produced, I replaced the so-called "vegetarian" shells with the gelatin ones, and I felt less stiff and achy.

The gelatin capsules aren't ideal either. They are produced from the collagen proteins derived from animals' connective tissues (mostly skins and bones, but other tissues can be used as well). This is probably why it's unappealing to many people who are not even vegetarian. It's surprising to me though, how people who dislike the idea of gelatin still eat the jiggly gelatin-containing desserts.

For the gelatin capsules, because of the concern about mad-cow disease, some manufacturers provide certifications that their products are free of BSE (bovine spongiform encephalopathy) or TSE (transmissible spongiform encephalopathy). They also disclose their sources (pigs, cows) and what animal parts (skin, bones) they use; retailers may also pass this information onto their sites. Other certifications are Kosher and Halal, because beside a personal or dietary preference, there are also religious reasons why people choose "vegetable" capsules.

Gelatin capsules are no strangers to preservatives, additives and excipients either, but plain ones (gelatin and water), are available. Artificial colors, sodium lauryl sulfate (SLS), and plasticizers can also be added, especially for the prescription medications.

Here is an example of a capsule shell for one of the prescription medications I take, and has the following components: "gelatin, silicon dioxide and SLS added as manufacturing aides to gelatin and titanium dioxide, imprinting ink of n-butyl alcohol, pharmaceutical glaze modified in SD-45, propylene glycol, SDA-3A alcohol, titanium dioxide, D&C yellow No. 10, Aluminum Lake, and FD&C blue No.1 Aluminum Lake." Do I really need all these? As this is not an extended-release medicine, I transfer the powder into plain gelatin capsules and the therapeutic effects are the same.

Some coatings are helpful in order to have certain medicines escape the stomach acid, bile and pancreatic enzymes; not cause stomach upset; reach the small intestine or colon where their effect is needed; or have the medicine delivered over an extended period of time. Some prescription medications do need their coatings, but many times, for the same active ingredient, there are available options that don't include them.

Another issue is that some enteric-coated or the extended-release capsules can be actually coated with plasticizers like phthalates. Their safetyor better said, their un-safetywas studied quite a bit, and in the United States, in 2008, some phthalates were finally banned from children's toys and baby-bottles. Unfortunately, others are still lurking in numerous consumers' products. Phthalates, acting as estrogen hormones in our bodies, are linked with fertility and developmental disorders.

Soft gel capsules (sometimes called caplets or liquid gels), are also made from gelatin, but can't be opened. They are often seen in over-the-counter products, ranging from pain relievers to supplements (vitamin D, fish oil). As opposed to the hard-shelled capsules that can only be filled with powder, the soft gel ones are used for medications that are oily or pasty. Mixing and homogenizing these is often done using polyethylene glycol (produced from ethylene oxide)my bigger nemesis.

BIO Marcela Magda Popa, M.D., author of the Amazon bestseller Keep Away from GRAS, and founder of Healthy Strategies Consulting, is a Board Certified Internal Medicine physician who graduated from Carol Davilla Medical School in Bucharest, (more...)

Related Topic(s): Health; Medicine; Supplements; Vitamins, Add Tags
Add to My Group(s)
Go To Commenting
The views expressed herein are the sole responsibility of the author and do not necessarily reflect those of this website or its editors.

Capsule Shells for Medications and Supplements