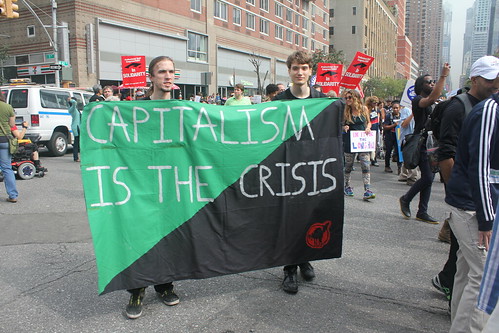 alienation
(Image by metamatic)   Details   DMCA
talism' is an ill-defined, politically charged word that is central to Americans' perception of their national identity. Yet, in a 2016 survey by the Harvard Institute of Politics, only 42% of American millennials (and a slim majority of voters overall) said they "supported capitalism." This alienation will only increase as the full meaning of the new Republican tax plan sinks in with people who haven't yet read below the euphemistic headlines about "tax cuts" and "tax reform."

To a nation whose income and wealth inequality has already risen to levels last seen in the gilded age, President Trump plans to give a "great, big, beautiful Christmas present." Under its gaudy wrapping, this package includes a corporate tax reduction (from 35% to 21%), large tax cuts for the already wealthy and little or nothing for the rest of us. By 2027, taxes will go up for households earning less than $75,000. Congressional Republicans are planning to cut back on Medicare, Social Security and welfare programs as a way to pay for revenue lost to these tax cuts. That's why the non-partisan Tax Policy Center concludes that

"If you consider plausible ways of financing [the deficit created by the tax cuts in] either the House or the Senate bill, most low-and middle-income households would eventually end up worse off than if the bill did not become law."

The bills also end the Obamacare mandate. According to the Congressional Budget Office, this will result in 13 million fewer Americans with health insurance. Merry Christmas.

To justify this awful legislation, Republicans invoke a trickle-down, supply-side mantra that is discredited by nearly all economists and by history. They claim that if wealthy investors get tax cuts, they will use their extra money to make profits from new production that creates jobs and raises paychecks. Yet, as Michael Bloomberg points out, corporations don't need the extra trillion dollars generated by the corporate tax cut; they're already sitting on $2.3 trillion in liquid assets.

According to Market Watch, corporate profits are at a record high but "America is starved for new investments in infrastructure, capital equipment and new technology." Big corporations have discovered that it's "a lot easier to invest in Wall Street securities than it is to build a factory or office on Main Street." With wages stagnant, demand for new products and services is slack. So why invest in new production?

Republicans know that CEOs won't use their trillion-dollar gift to engage in socially useful investment. Last Nov. 14 Trump's Treasury Secretary Gary Cohn was sitting onstage in front of a large audience of CEOs and top executives at the Wall Street Journal's CEO Council meeting. "A Journal editor asked the crowd to raise their hands if their company plans to invest more if the tax reform bill passes. Very few hands went up." Cohn was embarrassed but undeterred.

The overriding agenda of the GOP is to add to the wealth of their rich donors. They can lie about it (e.g. calling the tax bill relief for the middle-class) or hide their agenda behind appeals to nativism, racism, sexism, homophobia, anti-intellectual and anti-scientific attitudes lurking in conservative Christianity, and single-issue voters opposed to abortion.

But sometimes there are moments of candor, as when Rep. Chris Collins (R-NY) said: "My donors are basically saying, 'Get it [the tax bill] done or don't ever call me again.'" Or when Sen. Lindsey Graham told a journalist that if the tax bill failed, "the financial contributions will stop."

Capitalism is essentially predatory--it seeks to subordinate all the functions of the state to the growth of capital. It seeks to privatize and profit from formerly public functions such as prisons, education, defense, intelligence, communication networks, water supply and the supervision of banking and monetary policy.

It follows the imperative laid out by Milton Friedman in his hugely influential 1970 New York Times essay "The Social Responsibility of Business is to Increase its Profits." He argued that in a typical corporation there is one and only one group of stakeholders to whom management is responsible: shareholders. Management is obliged "to conduct the business in accordance with their desires, which generally will be to make as much money as possible while conforming to the basic rules of the society, both those embodied in law and those embodied in ethical custom."

What his simple-minded argument overlooked was that the growth of capital is growth in the power of capitalists to shape "the basic rules of the society" to their advantage, as we have seen in a succession of tax cuts for the investor class under Reagan, Bush and now Trump. And just a few days ago the Federal Communications Commission (FCC) became a striking example of capitalist predation.

On Dec. 14 the Republican majority on the FCC voted to repeal the 2015 net neutrality rule which barred internet service providers such as Comcast or Verizon from deliberately speeding up, slowing down or blocking traffic from specific websites and apps. They can now discriminate based on political views. A public function, what was our information freeway, is about to become a toll road controlled by large corporations who can charge you different rates for different speeds and destinations.

'Capitalism' is often confused with other, more positive aspects of our economic life, as in the opening words of Britannica.com's entry on capitalism: "Capitalism, also called free market economy or free enterprise economy." It is good for a society to have a market in which entrepreneurs are free to offer products and services in a market. But we can have these without subordinating our society to the goals of predatory Friedmaneque mega-corporations.

'Capitalism' needs to lose its luster. It should be understood as a great danger to democracy and human flourishing.

Related Topic(s): Capitalism; Capitalism Failures; Corporations; Economic; Economy; Health; Inequality; Internet; Internet; Obamacare; (more...) Politics; Power; Republican; State; Taxes, Add Tags  (less...)
Add to My Group(s)
Go To Commenting
The views expressed herein are the sole responsibility of the author and do not necessarily reflect those of this website or its editors.