"One can behold in capitalism a religion, that is to say, capitalism essentially serves to satisfy the same worries, anguish, and disquiet formerly answered by so-called religion."

"This yellow slave will knit and break religions"

David R. Loy, a professor of international studies at Bunkyo University in Japan and a Zen Buddhist teacher, offers us a compelling viewpoint on why we ought to understand our present economic system as the West's dominant religion. In A Buddhist History of the West (2002), Loy argues that, although religion is "notoriously difficult to define," if we "adopt a functionalist view and understand religion as what grounds us by teaching us what this world is, and what our role in the world is, then it becomes evident that traditional religions are fulfilling this role less and less, because that function is being supplanted by other belief systems and value systems." 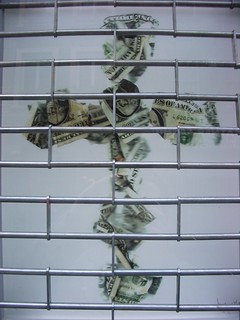 This is a shocking statement for those of conventional religious sensibility. Certainly the monotheistic faith-traditions have not just disappeared into the thin air of modernity. One could make a solid case that Islamic cultures still contain strong currents of resistance to Western consumer individualism (perceived as decadent and nihilistic). But in the West, Christianity in particular, has lost much of its power to resist the new god that has (and is) conquering the old ones (just like Christianity did in its displacement of Roman deities). Although the monotheistic religions contain many different streams and tendencies (including ascetic and contemplative traditions), these minority anti-materialist traditions have not been able to prevent the market from becoming our "first truly world religion, binding all corners of the globe into a worldview and set of values whose religious role we overlook only because we insist on seeing them as secular" (Loy). Economics is the new theology of this global religion of the market; consumerism its highest good; its language of hedge funds and derivatives as incomprehensibly esoteric as Christian teachings about the Trinity. "Accumulate, accumulate! This is Moses and the prophets! Marx cried out in the first volume of Capital.

Loy wonders why we acquiesce in the appalling realities of global inequities and sleep so peacefully at night. He finds his answer in Rodney Dobell's explanation that "lies largely in our embrace of a peculiarly European or Western [but now global] religion, an individualistic religion of economics and markets, which explains all of these outcomes as the inevitable results of an objective system in which " intervention is counterproductive." Any intervention in the "world of business" is perceived as a threat to the "natural order of things," a direct challenge to the "wisdom of the market." He claims that: "The hegemony achieved by this particular intellectual construct--a 'European religion' or economic religion--is remarkable; it has become a dogma of almost universal application, the dominant religion of our time, shoring up and justifying what would appear to be a patently inequitable status quo. It has achieved an immense influence which dominates human activity" ("Environmental degradation and the religion of the market." In H. Coward (ed.) Population, Consumption, and the Environment[1995]).

We have made fetishes out of commodities as we believe we can derive sensuous pleasure from their magical properties. We sacrifice our time, our families, our children, our forests, our seas and our land on the altar of the market, the god to whom we owe our deepest allegiance. Forsaking the consumer paradise for a life of
poverty, wandering with an empty begging bowl or devoting one's life to alleviating the plight of others is scarcely an option for most faith-community members.

Today we can scarcely find a moral perspective resident in the old world religions to challenge the hegemony of the religion of the market. The latter is ascendant; the old religions shunted to the sidelines. Indeed, globalizing capitalism seems the perfect fit with our human nature as essentially greedy and self-interested beings continually at war with one another over scarce resources. But economic historians (Weber,From Max Weber: Essays in Sociology [1946]; Tawney, Religion and the Rise of Capitalism [1926]; Polyani, The Great Transformation[1944]) inform us that in pre-modern societies pre-capitalist man valued material goods only as long as they served moral ends (such as enhancing social status and reinforcing social obligations).

Beginning in the late middle ages and reaching its first plateau in the late eighteenth century, the capitalist market began to assume an autonomous, god-like existence. As Max Weber understood so well (The Protestant Ethic and the Spirit of Capitalism [1946]), gradually the inner world ascetic impulse to know and serve God, who would reveal himself in the silence of the prayer chamber, evaporated. Protestant believers began to measure God's favour by their economic success. Economic success was the means to achieve the end of God's favor and eternal salvation. But this fragile link could not abide centuries of unrelenting capitalist achievement and success. Eventually, the means, economic blessings, displaced God himself. God was now The Market--the Source of all Hopes. Who disputes the gospel of sustained economic development? Even Jesus would drive an S.U.V, we can believe the late Rev. Jerry Fallwell, the once formidable American leader of the Christian Right.

Eighteenth-century Scottish Enlightenment thinker Adam Smith warned us over two centuries ago (in his Theory of moral sentiments [1759]) that the market was a "dangerous system because it corrodes the shared common values it needs to restrain its excesses" (Loy). Two hundred years later, Polyani inveighed against a system that annihilated "the human and natural substance of society." These are prescient words that echo in Habermas's raging against the "colonization of the lifeworld." Doesn't everyone know that the god we serve requires clear cut forests, depleted oceans, empty oil wells, toxics dumped into the biosphere? "A direct line," Loy observes sadly, "runs from the commodification of land, life, and patrimony during the eighteenth century to the ozone holes and global warming of today."

Everyone also knows, deep down, in their heart of hearts, that the god we serve actually has no life of its own. In Capital, volume 1, Marx imagined that the god of the market was like a vampire who "lives only by sucking living labor, and lives the more, the more labor it sucks." This monster feeds on the life force of the natural and human worlds. It needs men and women as slaves who have energy and the motivation to work endlessly with others to produce the goods. Even prolonging the working day, says Marx, "only slightly quenches the vampire thirst for the living blood of labor."

Serving this monster (capitalism produces lots of them!) generates endless sickness amongst the workers and eternal problems for the biosphere and human lifeworlds, which it depletes of life shamelessly. The money-code is at war with the life-code (John McMurtry, The Cancer Stage of Capitalism[1999]. Ironically, if the money-code (another name for the religion of the market) wins out in the end, that, indeed, is the end. As David McNally expresses it in Monsters of the Market: zombies, vampires, and global capitalism (2011), "If vampires are the dreaded beings who might possess us and turn us into their docile servants, zombies represent our haunted self-image, warning us that we might already be lifeless, disempowered alien powers."

Dr. Michael Welton is a professor at Athabasca University. He is the author of Designing the Just Learning Society: a Critical Inquiry.

Related Topic(s): Capitalism; Capitalism Over Humanity; Religion; Religion-Politics, Add Tags
Add to My Group(s)
Go To Commenting
The views expressed herein are the sole responsibility of the author and do not necessarily reflect those of this website or its editors.

Capitalism is the West's Dominant Religion