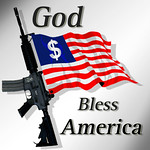 God Bless America - American Flag with M4A1 Rifle and Dollar sign
(Image by japetonida)   Details   DMCA
p>There are many things about our Western culture and history that perpetuate capitalism, imperialism, consumerism, and racism. During the first three centuries of the Common Era, Christians were nonviolent as taught by Jesus. When Christianity became institutionalized with the conquest of Constantine, the Church started thinking that some wars are just, and the Just War theory became widely accepted. David Swanson has recently written books like War is a Lie and War is Never Just to counter the predominate mindset. Materialistic greed can lead to war-making and imperialism.

Author and progressive foreign-policy expert William Blum wrote an article in 2013 entitled "Overthrowing Other People's Governments: The Master List," in which he lists over 50 instances of the United States overthrowing, or attempting to overthrow, a foreign government since the Second World War. Wayne Madsen recently wrote on the same subject an article for Infowars.com (the website of Alex Jones) called "Share This Chart: Countries Destroyed by Hillary [Clinton]." The article was even posted at Russia-Insider.com.

Andre Vltchek, whose latest 800-page book is entitled Exposing Lies of the Empire, is an important writer whom few Americans have yet heard of. Articles by insightful Paul Craig Roberts are rarely read by average Americans. And few average Americans have ever gone to youtube and watched the excellent interviews and speeches of Michael Parenti and Noam Chomsky.

Andre Vltchek has written, "The majority of European and North Americans appear to be thoroughly apathetic towards the state of the world... The difference between what US citizens think their rulers are doing in the world and what their rulers are actually doing is one of the greatest propaganda feats in modern history... While the American Empire constantly brags about 'democracy,' it is running the most totalitarian regime ever known to mankind." Like Andre Vltchek, we all should consider ourselves Internationalists; we should not just promote our own country; we should belong to the entire world.

Consumerism and capitalism have debased our culture and the planet. Imperialism (past and present) has created much havoc in the world with its colonialism and neo-colonialism, and now half the world lives on less than $2.50 a day. http://www.globalissues.org/article/26/poverty-facts-and-stats

As a long-time meditator, I have admired excellent meditation teachers such as the Dalai Lama, Thich Nhat Hanh, Ram Dass, and Steve Hagen. The Dalai Lama, I read recently, stated that he is half Buddhist and half Marxist. Thich Nhat Hanh is a leader in the "Engaged Buddhism" movement (he coined the term), promoting the individual's active role in creating change. The Buddhist Peace Fellowship, influenced by Hanh, participates in various forms of nonviolent social activism and promotes environmentalism and nuclear disarmament. Jon Kabat-Zinn is a popular mindfulness meditation instructor, and he is the brother of Howard Zinn, the famous author of A People's History of the United States.

I appreciate the above individuals. My deep concern, however, is that many adherents of Eastern philosophy and meditation, alternative-health therapies, and yoga, are not any different from most Americans: They are too preoccupied with football, movies, food, electronic gadgets, relationship issues, and job stress to know what the US military and CIA have been doing around the world. To know that, one cannot just listen to the mainstream corporate media.

The influence of mindfulness meditation is now reaching the corporate world--no doubt, to increase profits. But when I share at meditation groups my conviction that we each should focus on political transformation as much as we do our own inner transformation, I find that group members sometimes get a little defensive.

Often people will say, "We all have different gifts. Some people don't have the time or interest to be politically minded, or they don't have the inclination to be political activists." They sometimes tell me that we need to find inner peace before we can create outer peace. But I think if the house is starting to burn down, everyone has to help put out the fire. Thus, it is the duty of every citizen to take civics and citizenship very seriously. If our two-party system is a corrupt sham, a big joke, we each have to feel responsible for changing the system. If there is a nuclear holocaust causing World War III, we won't be able to sit around meditating on our navels.

Current religions, unfortunately, do not advocate the eradication of capitalism and imperialism in their official belief statements; however, a few Quakers and Unitarian-Universalists in general support liberal or progressive political agendas. Secular humanism, Marxism, communism, and socialism are worldviews. They are sometimes called religions when adherents rigidly follow a party line lockstep without doing their own independent thinking.

Traditional Christians, Jews, and Muslims believe that there is a God separate and distinct from the universe He created. They pray to this personal and whimsical God, asking that He will have mercy and answer their prayers. Instead of striving to have psychological understanding of themselves and others, many religious people just believe that if they pray fervently enough their prayers will be answered.

Hindus, Buddhists, and yogis, on the other hand, believe that God, or an impersonal Source, is not separate from the universe; it is always within everything and every person. They often believe that if they just meditate, they will solve all psychological problems and find meaning in their life, as they discover the boundless joy of the Self or Void through detached observation of the mind/body or through what Krishnamurti called "choiceless awareness."

Almost half of the American population believes that the Rapture or Second Coming is imminent, and that you have to take Jesus as your lord and savior in order to be "saved." Instead of dismissing such people as hopelessly brain dead, we need to kindly and respectfully engage them in conversation and seek to hear their best arguments as to why they believe the way they do.

Evangelical Christians can be encouraged to listen to podcasts by Ernie Bringas, for example. Bringas, a former United Methodist pastor who now teaches theology, is the author of JesusGate: A History of Concealment Unraveled. He provides the latest Bible scholarship in a way that lay people can understand. Bringas contends that if pastors shared what they learned at liberal seminaries about the virgin birth, resurrection, and the trinity, many parishioners would leave the church, and such pastors would be without a congregation or livelihood. http://www.strategiesforliving.com/podcast.php?p=2206 and also http://www.blogtalkradio.com/scottclutheslovecafe/2012/12/14/jesusgate--ernie-bringas-on-scott-cluthes-p-i-radio

Related Topic(s): Buddhist; Capitalism Over Humanity; Christianity; Culture Of Corruption; Culture Of Deception; Education; Food; Marijuana; Meditation; Neighborhood; (more...) Psychiatry; Psychology; Religion; Schools; Vegan; Western Imperialism, Add Tags  (less...)
Add to My Group(s)
Go To Commenting
The views expressed herein are the sole responsibility of the author and do not necessarily reflect those of this website or its editors.