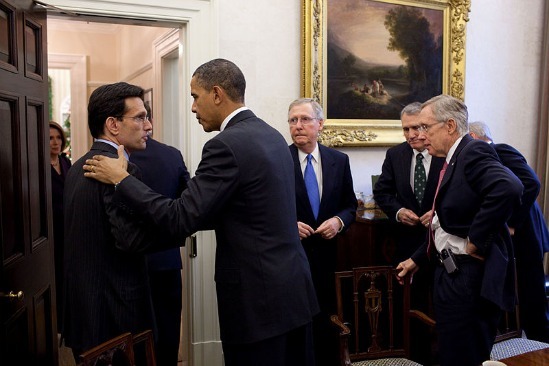 Though the memo lacks key details about many of the cuts, it contains enough to show where, exactly, Republicans hope to achieve savings. Its largest single source of savings -- $100 billion worth -- comes from what the memo terms "Medicaid FMAP Reform," or matching funds to state governments for providing Medicaid services.

It calls for up to $53 billion in savings from instituting new cost-sharing protocols for so-called Medigap policies -- supplemental insurance sold to Medicare beneficiaries to cover the cost of services not covered, or partially covered by Medicare. Specifically, it would institute a $530 out-of-pocket premium for certain Medigap plans. It also calls for over $80 billion in additional cost-shifting for home health coverage, and for medical and prescription drug coverage.

According to reports, President Obama rejected the proposal "on the grounds that the GOP has refused anything other than revenue-neutral deficit reduction." In keeping with yesterday's statements from Boehner and Cantor that they were rejecting the "big deal" and wanted to return to the Biden talks, these are cuts that were identified in that round of negotiations that could potentially get bipartisan support. Which means Republicans would agree to them and Democrats would have their arms twisted into also voting for them because they primarily just shift costs to states and individuals without tackling actual cost reduction in the programs.

The $100 billion in Medicaid cuts are likely the cuts offered by the White House already, a cost-shifting to states that the White House said would achieve federal savings of $100 billion over 10 years. It would implement a "blended rate" of reimbursement to states, set significantly lower than the current federal support for the program. The Center on Budget and Policy Priorities analyzed the proposal and found:

The blended rate would be set significantly below the combined effect of the various federal matching rates a state would otherwise receive. This would save money for the federal government--the federal government would pay a lower percentage of overall Medicaid and CHIP costs than under current law, and states would bear a greater share. To compensate for the federal funding reductions, states would either have to contribute more of their own funds or, as is more likely, shift costs to beneficiaries and health care providers by scaling back benefits and already-low payment rates....

That would almost certainly throw a lot of people off of Medicaid and reduce services to other beneficiaries. States just will not be able to pick up the slack in this economy. That means more people being uninsured, working expressly against the goals of the Affordable Care Act. It also means drastically undermining what is now the most cost-effective health care program in the country.

To quote Ezra Klein, Medicaid is already "much, much, much cheaper than any other insurance product you can think of. It's cheaper than the health care members of Congress get, than private insurance, than Medicare. There's no trick that could substantially cut its costs below where they are now."

Related Topic(s): Cantor-Eric; Funding; Health; Medicare-Medicaid, Add Tags
Add to My Group(s)
Go To Commenting
The views expressed herein are the sole responsibility of the author and do not necessarily reflect those of this website or its editors.