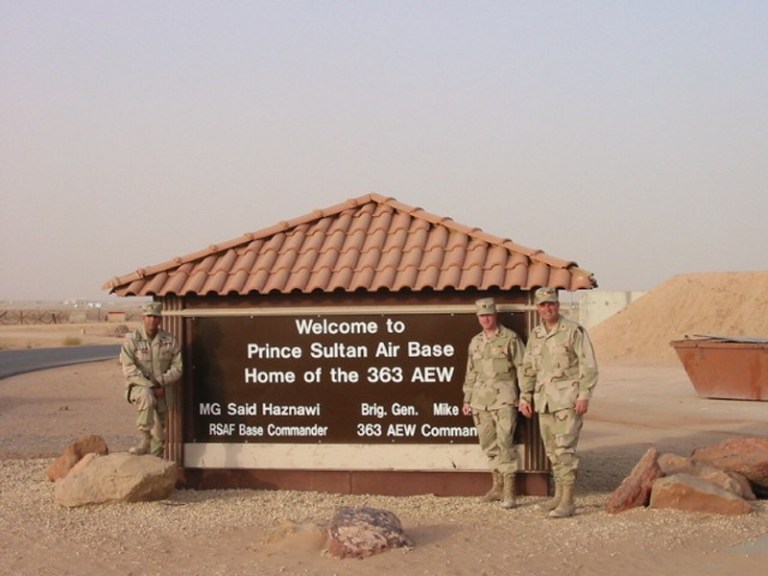 The revelation that Canadian soldiers have been in Saudi Arabia for 17 years highlights Canada's ties to the repressive monarchy, contribution to the Iraq war and hollowness of Canadian foreign policy mythology.

Recently researcher Anthony Fenton tweeted, "raise your hand if you knew that there was a 'Detachment' of Canadian soldiers serving under US auspices operating AWACS spy planes out of a Saudi Arabian air base since the war on Iraq began in 2003 to THE PRESENT DAY."

The Canadian soldiers stationed at Prince Sultan Air base near Riyadh represent another example of Canada's military ties to the authoritarian, belligerent monarchy. Canadian naval vessels are engaged in multinational patrols with their Saudi counterparts in the region; Saudi Air Force pilots have trained in Alberta and Saskatchewan; Montreal-based flight simulator company CAE has trained Saudi pilots in numerous locales; Canadian-made rifles and armoured vehicles have been shipped to the monarchy, etc.

According to DND, Canada's deployment to Saudi Arabia began on February 27, 2003. That's four weeks before the massive US-led invasion of Iraq. The Canadians stationed in Riyadh were almost certainly dispatched to support the US invasion and occupation.

In another example of Canadian complicity in a war Ottawa ostensibly opposed, it was recently reported that Canadian intelligence agencies hid their disagreement with politicized US intelligence reports on Iraq. According to "Getting it Right: Canadian Intelligence Assessments on Iraq, 2002-2003", Canada's intelligence agencies mostly concluded that Saddam Hussein had no weapons of mass destruction, which was the justification Washington gave for invading Iraq. While CSIS delivered a report to their US counterparts claiming Iraq was seeking nuclear weapons capabilities, more serious analyses, reported the Canadian Press, were "classified 'Canadian Eyes Only' in order to avoid uncomfortable disagreements with the U.S. intelligence community which would exacerbate the sensitivities affecting relations at the political level."

As Richard Sanders has detailed, Canada supported the US-led invasion of Iraq in many ways: Dozens of Canadian troops were integrated in US units fighting in Iraq; US warplanes enroute to that country refueled in Newfoundland; Canadian fighter pilots participated in "training" missions in Iraq; Three different Canadian generals oversaw tens of thousands of international troops there; Canadian aid flowed to the country in support of US policy; With Canadian naval vessels leading maritime interdiction efforts off the coast of Iraq, Ottawa had legal opinion suggesting it was technically at war with that country.

As such, some have concluded Canada was the fifth or sixth biggest contributor to the US-led war. But the Jean Chre'tien government didn't do what the Bush administration wanted above all else, which was to publicly endorse the invasion by joining the "coalition of the willing". This wasn't because he distrusted pre-war US intelligence or because of any moral principle. Rather, the Liberal government refused to join the "coalition of the willing" because hundreds of thousands of Canadians took to the streets against the war, particularly in Quebec. With the biggest demonstrations taking place in Montre'al and Quebecers strongly opposed to the war, the federal government feared that openly endorsing the invasion would boost the sovereignist Parti Que'becois vote in the next provincial election.

Over the past 17 years this important, if partial, victory won by antiwar activists has been widely distorted and mythologized. The recent National Film Board documentary High Wire continues the pattern. I t purportedly "examines the reasons that Canada declined to take part in the 2003 US-led military mission in Iraq." But, High Wire all but ignores Canada's military contribution to the war and the central role popular protest played in the "coalition of the willing" decision, focusing instead on an enlightened leader who simply chose to do the right thing.

The revelation that Canadian troops have been stationed in Saudi Arabia for 17 years highlights our military ties to the Saudi monarchy and warfare in the Middle East. It also contradicts benevolent Canada foreign policy mythology.