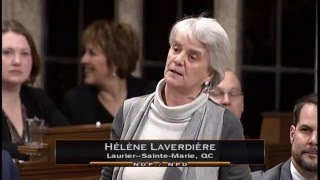 Helene Laverdiere is a Canadian Member of Parliament and recipient of the Foreign Minister's Award for her contribution to Canadian foreign policy. This is her January 22 letter to the Canadian Minister of Foreign Affairs regarding the detention and abuse of Ahed Tamimi and other children detained by Israel:

Re: Ahed Tamimi and the No Way to Treat a Child campaign

I write to you regarding the detention of Palestinian children by the Israeli military.

No doubt you are already aware of the case of Ahed Tamimi, a 16-year-old Palestinian child detained in December, who could face up to 10 years in prison over an altercation with Israeli soldiers in the occupied West Bank. On the same day as the incident in question, Ahed's 15-year-old cousin was shot in the head with a rubber bullet fired by an Israeli soldier. Human rights organizations including Amnesty International and Human Rights Watch have called for Ahed's release from detention, and her case has earned international attention, including from many Canadians who have written to me to request action from the Canadian government.

Ahed Tamimi's case is but one of many troubling cases of military detention of children under the Israeli occupation.

Many Canadians have written to me regarding the No Way to Treat a Child campaign which is a joint project of Defense for Children International Palestine and the American Friends Service Committee. This campaign and UNICEF's reports on "Children in Israeli Military Detention" have revealed widespread and systematic mistreatment of Palestinian children in the Israeli military detention system.

I urge you to speak on behalf of thousands of concerned Canadians by pressing the Israeli government to fully comply with the Convention on the Rights of the Child, and ensure that Palestinian children are treated fairly, and in full respect of their internationally-recognized rights.

Related Topic(s): Ahed Tamimi; Canadian Govt-Politics; Child Abuse; Palestinian; Parliament, Add Tags
Add to My Group(s)
Go To Commenting
The views expressed herein are the sole responsibility of the author and do not necessarily reflect those of this website or its editors.

STAY IN THE KNOW
If you've enjoyed this, sign up for our daily or weekly newsletter to get lots of great progressive content.
Series: "Bullying"