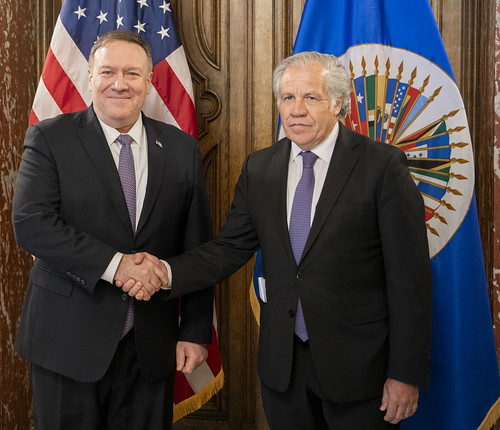 [In an historic event on Thursday, August 20, Venezuelan Foreign Minister Jorge Arreaza will discuss "Canadian Interference in Venezuela." You can register for the webinar here.]

When people say "America" everyone understands they mean one country, the USA. In a similar fashion it is time for all to understand that the Organization of American States (OAS) serves the interests of that country.

In a recent webinar on "Bolivia's fight to restore democracy and Canada's role" organized by the Canadian Latin America Alliance and Canadian Foreign Policy Institute, Matthew Green forthrightly criticized Canadian policy in that country and the hemisphere. The NDP MP said "Canada is complicit in the attack on indigeneity in Bolivia" and that "we are an imperialist, extractivist country." He added that "we ought not be a part of a pseudo-imperialist group like the Lima Group" and criticized "Canada's involvement in the OAS."

Green's statements build on a Jack Harris, the NDP foreign affairs critic, recent comment that the OAS was a "tool of the United States" with "undue influence on other members." In a Hill Times story titled "NDP, Green MPs raise concern over Canada's trust in OAS election monitoring in Bolivia" Paul Manly also criticized the OAS. The Green MP said the Organization is "not a credible, impartial player when it comes to leftist governments in South America. It was established to advance U.S. interests."

The head of the OAS, Luis Almagro, is promoting extreme pro-Donald Trump positions. Recently, the OAS released a statement condemning protesters in Bolivia calling for elections. The coup government there has repeatedly postponed elections after the country's first ever indigenous president was ousted partly as a result of a highly politicized OAS criticism of last October's election. As the Onion recently satirized about Bolivia, the best way to ensure there are no "electoral irregularities" is to avoid elections altogether.

In Nicaragua the OAS has backed those seeking to oust Daniel Ortega's social democratic government. They've repeatedly condemned the Sandinista government, prompting Nicaragua to refuse the OAS entry to the country. At the same time the OAS has largely ignored Nicaragua's Central American neighbour even though Juan Orlando Hernandez defied the Honduras constitution by running for a second term as president and then brazenly stole the election.

In Haiti Almagro has aggressively championed corrupt, repressive and widely despised President Jovenel Moïse. The Secretary General of the OAS recently stated that Moïse's mandate expired in February 2022, not February 2021 as most Haitians want and constitutional experts have argued. There is also some evidence to suggest the OAS is setting up to support Moïse's effort to rig the elections. Recently, Haiti's entire nine person electoral council resigned in response to Moïse's pressure and the OAS continues to engage with a process that almost all political actors in Haiti reject.

In response Haïti Liberte''s Kim Ives noted, "what could be more ironic and ludicrous than Haiti's President Jovenel Moïse accusing Venezuela's President Nicolas Maduro of being 'illegitimate and dictatorial' while demanding that he immediately 'hold free, fair, and transparent general elections'? But that is exactly the position of the Lima Group, a collection of 15 Latin American states and Canada, which Haiti joined in January 2020."

Almagro is an extremist on Venezuela. Three years ago the former Uruguayan Foreign Minister's actions as head of the OAS prompted Almagro's past boss, former Uruguayan president Jose' Mujica, to condemn his bias against the Venezuelan government. In 2017 Almagro appointed long-time critic of Hugo Chavez and vicious anti-Palestinian Canadian politician, Irwin Cotler, and two others to a panel that launched the process of bringing Venezuela to the International Criminal Court. In a Real News Network interview Max Blumenthal described "the hyperbolic and propagandistic nature" of the press conference where the 400-page Canadian-backed report was released at the OAS in Washington. At the event Cotler ridiculously claimed Venezuela's "government itself was responsible for the worst ever humanitarian crisis in the region."

A year later Almagro mused about an invasion of Venezuela. He stated, "as for military intervention to overthrow the Nicolas Maduro regime, I think we should not rule out any option " diplomacy remains the first option but we can't exclude any action."

The OAS receives between 44% and 57% of its budget from Washington. While it's now the organization's second largest contributor, Canada was not part of the OAS for its first 42 years. For decades Canada's foreign-policy establishment wavered on joining the US-dominated organization. Not long after signing the free-trade agreement with the US, Brian Mulroney's government joined the OAS in 1990.

The Matthew Green, Paul Manly and Jack Harris criticism of the OAS deserve a wide airing. All opponents of US bullying in the Americas should push for Canada to withdraw from the Organization of American States.