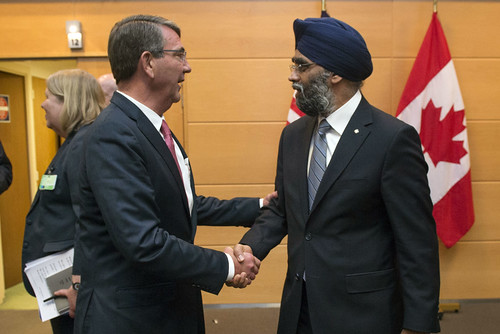 Presumably his "Assad must go" narrative about Syria is wearing thin. After all, NATO-member Turkey is a training ground for ISIS, a transit point for terrorists entering Syria, and, like the Canadian government, all of NATO, the Gulf monarchies, Wahhabi Saudi Arabia, and apartheid Israel, a staunch supporter of the terrorists; plus, it has also been long established that there are no "moderates."

Presumably, too, Sajjan needs to rebrand and recycle the "threat" narrative, and the "NATO are the good guys" meme, so he is now reintroducing Russia as a threat.

Corporate-media presstitutes, naturally, are all too willing to go along for the ride, even though reality and solid evidence contradicts the Western narrative.

The "Russia is a threat" narrative may have legs though, since any government that actually opposes terrorism is a perfect scapegoat for Empire: Libya, Iraq, Syria, and the Ukraine all successfully opposed terrorism before being attacked by NATO and its terrorist proxies.

When Russia bombs ISIS positions in Syria, ISIS territory actually decreases, and towns are liberated, as might be expected. When the U.S "bombs ISIS" in Syria, on the other hand, ISIS territory increases, thus frustrating barely disguised neo-con ambitions, and exposing the Big Lie.

Either Sajjan is totally ignorant of Ukraine's recent history -- which is possible --- or he is lying about the Ukraine as well.

Even the Head of Stratfor, George Freidman, publicly admitted that that the crisis in the Ukraine was initiated by "the most blatant coup in history."

Michel Chossudovsky confirms this assessment by explaining in "Two Years Ago: The U.S. has Installed a Neo-Nazi Government in Ukraine" that,

"Confirmed by Assistant Secretary of State Victoria Nuland, key organizations in the Ukraine including the Neo-Nazi party Svoboda were generously supported by Washington: 'We have invested more than 5 billion dollars to help Ukraine to achieve these and other goals... We will continue to promote Ukraine to the future it deserves."

Related Topic(s): Isis; Lies Media; Lies Neocon; Presstitutes; Self-determination, Add Tags
Add to My Group(s)
Go To Commenting
The views expressed herein are the sole responsibility of the author and do not necessarily reflect those of this website or its editors.