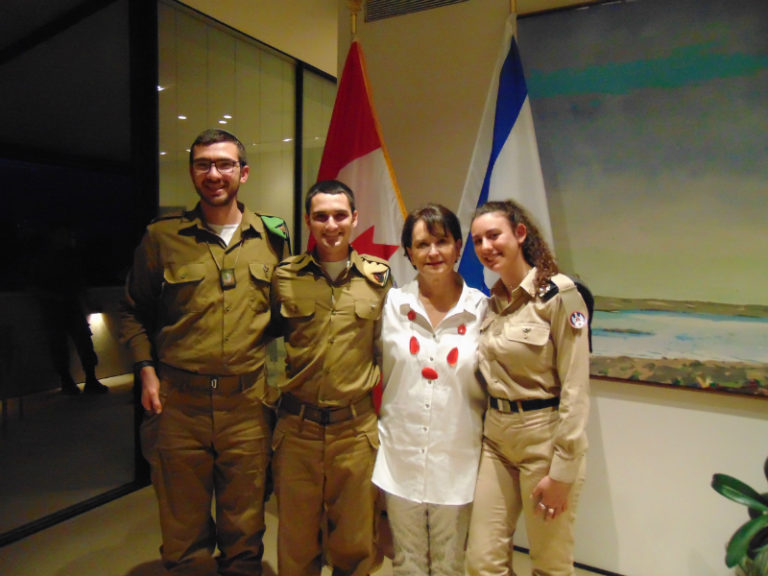 Canada is celebrating the agents of Palestinian misery.

Last month the Canadian Embassy in Tel Aviv held an event to celebrate Canadians fighting in the Israeli military. They invited all 78 Canadians in the IDF to the ambassador's residence to demonstrate their appreciation. Referring to non-Israelis who join the IDF, ambassador Deborah Lyons told the Jerusalem Post, "Canadian lone soldiers are a particularly special group " This is something we want to do on a yearly basis to show our support." At the event Canada's ambassador said, "we both share a love of Canada and a love of Israel. We at the embassy are very proud of what you're doing."

A top diplomat organizing an event to celebrate Canadians fighting for another country's military ought to generate criticism. Doing so while that force humiliates Palestinians at checkpoints in the West Bank, fires on protesters in Gaza and bombs Syria in violation of international law is an outrage that must be condemned.

The government has legislation designed to deter Canadians from joining other countries' militaries. The Foreign Enlistment Act is supposed to prohibit Canadians from recruiting for a foreign army. It notes, "any person who, within Canada, recruits or otherwise induces any person or body of persons to enlist or to accept any commission or engagement in the armed forces of any foreign state or other armed forces operating in that state is guilty of an offence."

Similarly, the Canada Revenue Agency (CRA) restricts registered charities from supporting other countries militaries. CRA guidelines note, "increasing the effectiveness and efficiency of Canada's armed forces is charitable, but supporting the armed forces of another country is not."

Despite these rules, ambassador Lyons celebrated Canadians fighting for the IDF. The event promoting the IDF was a nod to a network of Canadian organizations backing the Israeli military. In November 1100 people attended an Association for the Soldiers of IsraelCanada and Canadian Zionist Cultural Association event in Toronto. The Canadian Jewish News reported, "the evening featured heartfelt and captivating speeches from IDF commanders, as well as a performance by the IDF Ensemble."

Two months ago, Herut Canada brought Israeli military reservists to a number of Ontario universities. At York their event sparked a high-profile confrontation.

A number of Jewish day schools promote the Israeli military. At Toronto's Leo Baeck an Israeli emissary spends a year at the school and when they return, notes the Canadian Jewish News, "engages with students by way of live video chat from their Israel Defence Forces barracks dressed in their military uniforms." Students also pay "tribute to Israel's fallen heroes" and fundraise for Beit Halochem Canada/Aid to Disabled Veterans of Israel, which supports injured IDF soldiers.

At the other end of the age spectrum a group of 80-something Torontonians gather regularly to make hand-knitted tuques for IDF soldiers. They are part of the Hats for Israeli Soldiers initiative. Another organization that supports the IDF is Israel Defence Forces Widows & Orphans-Canada. Sar-El offers more concrete support to the IDF. Some 150 Canadians volunteer on Israeli army supply bases each year with an organization founded by an IDF general.

At its Toronto office, the Friends of Israeli Scouts' Garin Tzabar program provides Hebrew lessons and support services, as well as help with transport and accommodation in Israel, for Canadian "lone soldiers". Nefesh B'Nefesh's also helps non-Israelis join the IDF.

In November the Israeli consulate in Toronto announced a military recruiting effort. According to their announcement, "an IDF representative will conduct personal interviews at the Consulate on November 11-14. Young people who wish to enlist in the IDF or anyone who has not fulfilled their obligations according to the Israeli Defense Service Law are invited to meet with him."

Sar-El, Nefesh B'Nefesh, Heseg Foundation for Lone Soldiers, Israel Defence Forces Widows & Orphans-Canada andAssociation for the Soldiers of IsraelCanada (through the Canadian Zionist Cultural Association) offer tax receipts for donations. In January of last year the Beth Oloth Charitable Organization, which had $60 million in revenue in 2017, had its charitable status revoked for supporting the Israeli military. Not particularly well known, the organization appears to have been a conduit for donations to different Israeli charities.

In response to a formal complaint submitted by four Palestine solidarity activists and Independent Jewish Voices Canada in fall 2017, the Canada Revenue Agency (CRA) began an audit of the Jewish National Fund for contravening Canadian charitable law. The JNF financed multiple projects for the Israeli military in direct contravention of CRA rules for registered charities. Despite the JNF openly supporting the Israeli military, the audit of its operations has gone on for two years. The CRA is undoubtedly facing significant behind-the-scenes pressure to let the JNF off with little more than a slap on the wrist. In 2013 Justin Trudeau attended a JNF gala and other Liberal cabinet ministers participated in more recent events put on by an explicitly racist organization that Liberal MP Michael Leavitt once oversaw. Ambassador Lyons attended a JNF event in Jerusalem in 2016 and another one in October.

Canadian charitable guidelines and the Foreign Enlistment Act are designed to deter Canadians from supporting other countries' militaries. Yet Canada's ambassador in Israel is celebrating Canadians fighting in that military.

Related Topic(s): Boycott_israel; Canada; Israel; Israel Firsters; Israeli Attacks In Gaza; Israeli Fascism; Israeli_Propaganda; Palestinian; Palestinian Massacre, Add Tags
Add to My Group(s)
Go To Commenting
The views expressed herein are the sole responsibility of the author and do not necessarily reflect those of this website or its editors.