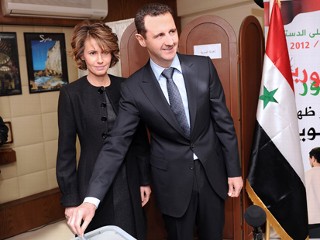 In its publicly announced regime change war against Syria, Canada is a strong supporter of externally supported and orchestrated terrorism and destabilization on the non-belligerent, pluralist country led by President al Assad's secular, democratically elected government.

Destabilization, as defined by former CIA agent John Stockwell, looks like this:

"They pick a government. They target them.

They send the CIA in with its resources and its activists: hiring people, hiring agents to tear apart the social and economic fabric of the country.

It's a technique for putting pressure on the government, hoping they can make the government come to the U.S.'s terms, or that the government will collapse altogether and they can engineer a coup d'etat, and have the thing wind up with their own choice of people in power.

Now ripping apart the economic and social fabric is fairly textbookish. What we're talking about is going in and deliberately creating conditions where the farmer can't get his produce to market; where children can't go to school; where women are terrified inside their homes as well as outside; where government administered programs grind to a complete halt; where the hospitals are treating wounded people instead of sick people; where international capital is scared away and the country goes bankrupt."

The illegal sanctions that Canada, the West, apartheid Israel, and their Wahhabi allies are imposing on Syria and Syrians serve to "destabilize" the country and to foster the growth of the West's allies who are not subject to sanctions and who benefit from destabilization. The West's allies in Syria include all of the terrorists, regardless of their nom du jour. Destabilization is terrorism.

Attacking infrastructure is also a Western specialty in the West's illegal war against Syria, and it is part of the destabilization program. For years now, the West and its allies have been criminally attacking bridges, schools, hospitals, thermal plants, factories, water plants, public utilities, civilians, and soldiers.

Needless to say, war crimes are the unstated policies of the West.

Now that Aleppo has been liberated, horror stories are unfolding regularly. Syrian Afraa Dagher reported this testimony from a recently freed citizen of East Aleppo:

They imposed al sharia on us. They were starving us, and if one stole a loaf of bread to eat, his hand was cut off. For women, we were not allowed to marry from our own men, from our own people, our own choices. We were told we had to marry them.

They said it is not allowed to let women to marry those who are pro-government, because they let women put on make up and work, and let women outside without covering faces. And this is taboo! Such women should be beheaded. And what kind of marriage to such terrorists would this be? It is just to please the man for one hour.

They will leave and send you to 'sex jihad'! This happened to my friends. And they took our kids to join them, too. It has been two years I have not seen my son. They stole him. Al Nusra Front did that. Women who refused to obey them were tortured, beheaded and put into cars carrying their severed heads, driving around the city as lessons to other women.

Related Topic(s): Bashar Al-assad; Misogyny; Secular; Syria, Add Tags
Add to My Group(s)
Go To Commenting
The views expressed herein are the sole responsibility of the author and do not necessarily reflect those of this website or its editors.