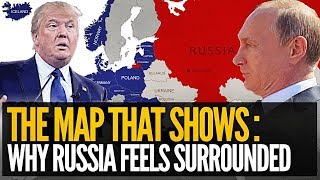 According to news reports in the British press, Russian President Vladimir Putin has instructed Russia's industries to prepare themselves to be able to make a quick switch to war production.

Clearly, the Russian government would not make such an announcement unless it was convinced that the prospect of war with the West was real. For some time I have emphasized in my columns that the consequence of years of hostile actions taken by Washington and its European vassals against Russia was leading to war.

It is easy to understand that the massive US military/security complex needs a convincing enemy in order to justify its enormous budget, that the crazed neoconservatives put their fantasy ideology of US world hegemony above the life of the planet, and that Hillary and the Democratic National Committee will do anything to overturn Trump's presidential victory. However, it is difficult to understand why the European political leaders are willing to put their countries at risk for Washington's benefit.

Yet, they do. For example, on November 13 UK PM Theresa May said that Russia was a threat to international security and was interfering in European elections and hacking European governments. There is no more evidence for these claims than there is for "Russiagate." Yet the allegations continue and multiply. Now the European Union is organizing former provinces of the Soviet Union -- Belarus, Moldova, Ukraine, Georgia, Armenia, and Azerbaijan -- into an "Eastern Partnership" with the European Union.

In other words, the West is openly organizing former provinces of Moscow against Russia, declared by Prime Minister May to be a "hostile state." Russia knows that there is no basis for the allegations against Russia and regards them as identical to the false allegations against Saddam Hussein, Gaddafi, and Assad in order to justify military attacks on Iraq, Libya, and Syria. Having convinced Russia that she is being set up for attack, Russia is preparing for war.

Think about this for a moment. The world is being driven to Armageddon simply because a greedy and corrupt US military/security complex needs an enemy to justify its huge budget, because Hillary and the DNC cannot accept a political defeat, and because the neoconservatives have an ideology of American Supremacy. What's the difference between the detested White Supremacy and the American Supremacy that President Obama himself endorsed? Why is white supremacy terrible and American supremacy God's gift to the "exceptional" and "indispensable" country?

The Russian government has openly shared its concern that Russia is being set up for military attack. As I, if not CNN, the New York Times, and the Washington Post, have reported, the deputy commander of the Russian military's Operation Command stated publicly the concern that Washington is preparing a surprise nuclear attack against Russia. President Putin recently called attention to Washington's collection of Russian DNA for a US Air Force weapons lab, which implies development of a Russian-specific bio-weapon. On many occasions Russia has called attention to US and NATO bases on its borders despite previous assurances from US administrations that no such thing would ever happen.

We have to ask ourselves why it is not the top item of public and political discussion that Washington has convinced Russia, a premier nuclear and military power, that Russia is going to be attacked. Instead, we hear of football players who kneel for the national anthem, fake news about Russiagate, a Las Vegas shooting, and so on.

We also must ask ourselves how much longer Washington is going to permit any of us via the Internet to report the real news instead of the fake news that Washington uses to control explanations. The effort by the Federal Communications Commission chairman to destroy net neutrality and other efforts underway to discredit factual news as Russian propaganda indicate that Washington has concluded that in order to war on Russia Washington must also war on truth.

For the war on net neutrality, see here and here.

Washington will not survive its war, and neither will the American and European people.

Related Topic(s): Internet; Military; Neoconservatives; Russiagate; Vladimir Putin, Add Tags
Add to My Group(s)
Go To Commenting
The views expressed herein are the sole responsibility of the author and do not necessarily reflect those of this website or its editors.