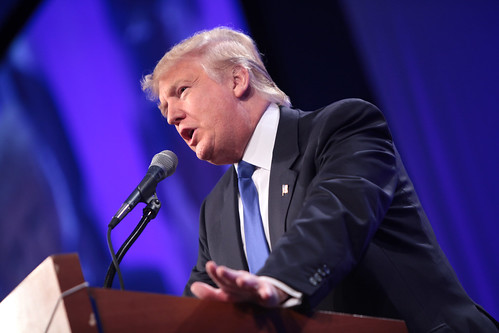 My view of Trump is conditional and awaits evidence. I am encouraged by the One Percent's opposition to Trump, or we have just experienced the greatest ruse in history. Indeed, a pointless ruse, as the Establishment had its candidate in Hillary.

Trump's executive orders don't support the argument that he is acting for the One Percent. Trump nixed the global corporations' beloved TPP. He is trying to close down the mass immigration that the corporations use to suppress domestic wage rates. He is committed to normalizing relations with Russia, much to the discomfort of the neoconservatives and the military/security complex.

Think about it this way: If Trump is sincere, and the Ruling Establishment seems to think that he is, about cleaning out a nest of outlaws, what better help could he have than one of the outlaws?

Change from the top requires tough mean people. Anyone else would be run over.

My position is to wait for the evidence. For years my readers have said that they need some hope. Trump's attack on the Ruling Establishment gives them hope. Why take this hope away prematurely?

From the beginning, my concern has been that Trump has no experience in the economic and foreign policy debates. He doesn't know the issues or the players. But he knows two big things: the middle and working class are hurting, and conflict with Russia could result in thermo-nuclear war. My view is support him on these two most important of all issues.

My worry is that Trump has already gone off course on better relations with Russia. Trump had the sense to speak during his first week in office with Russia's President Putin. Reports are that the one-hour conversation went well. However, the report from the Trump administration is that the sanctions were not mentioned and that Trump is considering connecting the removal of the sanctions with a reduction in nuclear arms.

Clearly, Trump needs more astute advisers than he has. Confronted with 28 NATO countries, Russia, the population of which is dwarfed by this collection of countries and armaments, relies on its nuclear weapons to deal with the potential threat. During the Obama regime, the threat to Russia must have seemed to be very real, as the demonization of Russia and its President were based entirely on obvious lies and reached levels of provocation seldom seem in history without leading to war.

If I had been Trump's adviser, I would have insisted that the first thing that Trump tell Putin is that "the sanctions are history and I apologize for the insult based on the fabricated lies of my predecessor."

This is what was needed. Once trust is restored, then the matter of reduction in nuclear arms can be raised without making the Russian government concerned that the duplicitous Americans are setting them up for attack.

If you were a Russian, if you were a member of the Russian government, if you were president of Russia, if you had experienced an American coup that overthrew the elected government of Ukraine, a province that was part of Russia for 300 years, if you had experienced an American-inspired attack on the Russian residents and Russian peace-keeping forces in South Ossetia, long a province of Russia, that caused the intervention of the Russian armed forces, an intervention blamed by the US government on "Russian aggression," would you trust the United States? Only if you are a complete fool.

Trump needs advisers sufficiently knowledgeable to tell him about the situation that he has committed himself to improve.

Who are these advisers?

Related Topic(s): Immigration; Neoconservatives; Sanctions; Trump Foreign Policy; Trump Presidency, Add Tags
Add to My Group(s)
Go To Commenting
The views expressed herein are the sole responsibility of the author and do not necessarily reflect those of this website or its editors.