My first public interaction with my Congressman was at one of his town halls about seven years ago. Fresh off my fight to get my two daughters the services that they needed from the LAUSD, I asked Brad Sherman how more teeth could be put into the law that requires school districts to provide free and appropriate public education (FAPE) to children with disabilities. He responded that no one from the disability community had ever told him that the law needed more teeth and that parents could always hire a lawyer if they did not think that the district was in compliance. He also correctly noted the federal government had severely underfunded special education services and said that he had fought to fix this problem. He did not specify what steps he had taken or why he had been unsuccessful.

The next time Sherman and I spoke was at his booth at the Woodland Hills Concerts in the park. I introduced myself as a candidate in the LAUSD School Board race and he asked who the incumbent was. When I told him that it was Tamar Galatzan his only response was that she has always supported him. It was a strangely honest answer; he did not care what Galatzan's positions were, only that she could help him stay in office.

At one of the last town halls that I attended, Sherman sounded more like a Republican than the progressive Democrat he claims to be. The Congressman is a well-known foreign relations hawk, so it was not surprising that he opposed Obama's Iranian Nuclear Deal. What caught me off guard was that he was using Fox News' talking points to make his case. This included spreading the lie that the United States had paid Iran money as part of the deal. The truth was that we had returned their own funds to them that we had been holding since canceling an arms deal.

Every two years, in each congressional election, I keep hoping for the chance to vote for an actual progressive candidate but instead end up feeling like I am stuck in a Groundhog Day scenario. In election after election, the Democratic votes against Sherman are split allowing Sherman and his perennial Republican candidate Mark Reed to advance to the general election. Given the choice between the milk toast incumbent and a Tea Partying Trump Republican who does not even live in the district, voters overwhelmingly sent Sherman back to Washington.

Sherman already has at least one opponent for the 2022 midterm election who is seeking to block him from serving his 26th year in Congress. Shervin Aazami is running for the CA-30 Congressional seat with a decidedly progressive platform that includes support for the Green New Deal, Medicare For All, and criminal justice reform. In sharp contrast to the hawkish Sherman, his opponent seeks a "foreign policy that reflects our commitment to justice, not militarism and exploitation."

Shervin earned a Masters of Public Health degree from George Washington University and his resume includes successful advocacy work centered on health policy. It is, therefore, not surprising that his campaign web site includes detailed plans for "a true public health response to COVID-19."

In comparison, the bradsherman.com website does not even mention COVID-19 under a page labeled "let's talk about what matters." Perhaps this is because the site does not appear to have been updated in years. It is so outdated that Gavin Newsom is still listed as the Lieutenant Governor and convicted felon Mitchell Englander is still included among the politicians endorsing the Congressman. Apparently, it has been several years since Sherman has felt his job was in any kind of jeopardy.

(Image by Sherman for Congress)   Details   DMCA
Another subject that does not get any mention on Sherman's issues page is education. Shervin's discussion of the subject is extensive and contains the recognition that "charter K-12 schools have exacerbated racial segregation in the school system and drained more and more funding from traditional public schools." His answers to the questions that were asked of the 2020 candidates before the primary were extremely thorough and are printed below. Unfortunately, they cannot be compared to the general election candidates since neither one of them provided a response.

With 13 months left to the primary, it is still too early to predict what the complete field is going to look like. In fact, with the census count still outstanding it is unknown what the boundaries of the district are going to be. In any case, to move out the Groundhog Day scenario, progressives are going to need to solidify around one candidate if Mark Reed is to be kept out of the general election. Only by doing this can Sherman be forced to run an actual campaign and allow a debate centered on the issues. 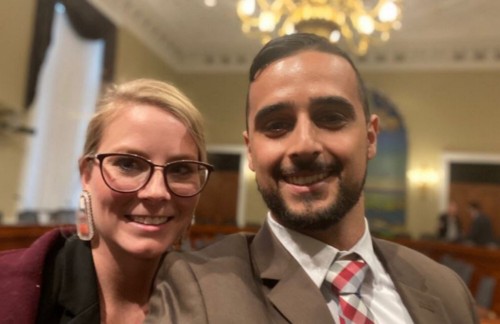 (Image by SHERVIN AAZAMI FOR CONGRESS)   Details   DMCA
Question 1: Federal legislation authorizes "Congress to contribute up to 40% of the average per-pupil expenditure" for mandated special education services. Unfortunately, this funding has never materialized. What will you do to ensure that programs and services for those with special education needs are appropriately funded?

Shervin: Our education system requires significant structural reform, and that includes addressing decades of chronic underfunding of education needs for students with learning disabilities. Congress has never lived up to the promise of the Individuals with Disabilities Education Act (IDEA), passed over four decades ago. According to the National Center for Learning Disabilities, while the number of students with special needs covered under IDEA has increased by 25%, the federal government is covering under 15% of the tab - despite the promise to cover up to 40%.

While I support H.R. 1878 - IDEA Full Funding Act - that legislation would only phase in 40% coverage by 2029, and requires funding offsets (i.e. "pay-go restrictions") from other crucial social programs to pay for full IDEA funding. Enough is enough - we should not compromise one essential government service for another. We need to defund our military-industrial complex, make the wealthy pay their fair share in taxes, and use those cost savings and tax revenues to fully fund our educational obligations - including IDEA - as entitlement programs. Turning IDEA funding into an entitlement would also protect it from the turbulence of congress's annual discretionary budget process - which for decades has been marred by delays, government shutdowns, and short-term spending stopgaps.

My education platform also calls for a federal pension for all K-12 public school teachers that covers 70% of their annual salary. Public teacher pension debt now comprises about 15% of state and local education funding overall. At a whopping $640 billion, public teacher pension debt represents 80% of pension debt overall. A federal K-12 teacher pension honors the essential role of our teachers and frees state and local funds to reinvest in higher teacher pay, lower classroom sizes, and better school infrastructure and resources. This especially benefits students with learning disabilities by freeing up local funds to hire and better train teachers to address the needs of our students with special needs.

Shervin: At its core, ensuring funding for special needs education is a racial equity issue. Of all IDEA students served in the 2018-2019 school year, 47% were Black, Latinx, or Indigenous, according to the National Center for Education Statistics. We address the funding shortfalls by utilizing a public health approach to education policy, whereby resources are directed to the greatest area of need and impact. That means redesigning funding formulas to direct funding towards the schools with the highest population of special needs students, with statutory funding set-asides to guarantee funding is allocated to special needs students in low-income communities of color. At the same time, we must continue to ensure a baseline amount of funding continues flowing to all public schools for special needs education - recognizing that 14% of all public school students nationwide have special education needs.

Related Topic(s): Democrat, Add Tags
Add to My Group(s)
Go To Commenting
The views expressed herein are the sole responsibility of the author and do not necessarily reflect those of this website or its editors.