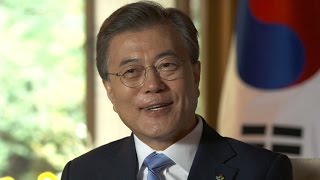 The agreement for cooperation between North and South Korea on the Olympics provides a pause in the drumbeat of war threats by postponing joint U.S.-South Korean military exercises until after the Winter Games are finished. But the real payoff from the Olympics detente is the possibility that the governments of South Korean President Moon Jae-in and North Korea's Kim Jong Un could reach agreement on modifying joint U.S.-Republic of Korea (ROK) military exercises in return for a North Korean nuclear and missile testing freeze.

That intra-Korean deal could open a new path to negotiations between the United States and North Korea over Pyongyang's nuclear and missile programs and a final settlement of the Korean War -- if Donald Trump is willing to take such an off-ramp from the crisis. But it's not just Kim Jong Un who has taken the diplomatic initiative to open such a path out of the crisis. Moon Jae-in has been working to advance such a compromise since he was inaugurated as South Korean president last May.

The Moon proposal -- which has never been reported in U.S. news media -- was first floated just 10 days before Moon was to arrive for a June 29 summit meeting with Trump in Washington, D.C. Moon's special adviser on unification, foreign affairs and national security, Moon Chung-in, presented the proposal at a seminar at the Wilson Center in Washington as a reflection of President Moon's thinking.

Moon Chung-in said one of the president's ideas was that South Korea and the U.S. "can discuss reducing the South Korea-U.S. joint military exercises if North Korea suspends its nuclear weapons and missile activities." He added that President Moon "was thinking that we could even decrease the American strategic assets that are deployed to the Korean Peninsula [during the exercises]."

Speaking with South Korean correspondents after the seminar, Moon Chung-in said there is "no need to deploy strategic assets such as aircraft carriers and nuclear submarines during the Key Resolve and Foal Eagle exercises." Military planners use the term "strategic assets" to refer to aircraft and ships capable of delivering nuclear weapons, to which North Korea have long objected strenuously.

Moon Chung-in suggested stripping those "strategic assets," which had never been part of the joint exercises before 2015, out of the joint exercises, arguing that their addition had turned out to be a strategic mistake. "Since the U.S. has forward deployed its strategic assets," he said, "North Korea seems to be responding in this way because it thinks that the U.S. will strike if the North shows any weakness."

Moon Chung-in told South Korean reporters later that he was presenting his own ideas, which were not the official policy of the government, but that "it would not be wrong" to say that President Moon agreed with them. And a senior official in Moon's office who insisted on anonymity in talking to reporters did not deny that the idea discussed by Moon Chung-in was under consideration by President Moon, but said the office had told Chung that his statement "would not be helpful for the future relations between South Korea and the United States."

Another figure with ties to the new government, veteran diplomat Shin Bong-Kil, presented essentially the same proposal at a forum in Seoul in late June. Shin, former director of the Inter-Korea Policy Division of the ROK Foreign Ministry for many years and a member of the diplomatic team the Moon administration had sent to explain its policies to the Chinese government, had just returned from a conference in Stockholm in which North Korean foreign ministry officials also participated. Based on what he heard at the conference, Shin argued that offering to eliminate such elements from the joint Key Resolve and Foal Eagle exercises would provide what he called "huge leverage" to get North Korean acceptance of a nuclear and missile testing freeze.

He was suggesting the need to substitute the "freeze for freeze" proposal embraced by Beijing, Pyongyang and Moscow, which would require a complete end to joint U.S.-South Korean military exercises for a freeze on North Korean nuclear and missile testing--an option the U.S. military has rejected.

Two American Korea experts already had been developing their own detailed proposal for downsizing the U.S.-ROK exercises. Joel Wit, a former senior adviser to Ambassador Robert Gallucci in the negotiation of the agreed framework -- who now runs the website 38 North, focused on North Korea -- and William McKinney, former chief of the Far East branch in the political-military division of Army headquarters at the Pentagon, argued that the flights of nuclear-capable aircraft and other "strategic assets" weren't necessary for U.S. military objectives.

As McKinney noted in an interview with me, the U.S. flights simulating nuclear attacks on the North using dual capability aircraft "are generally outside the exercise program." The purpose of those flights, McKinney said, "is to be a visible expression of our deterrent capability, and it could be argued that it has already been shown."

Among other changes, McKinney and Wit proposed that the joint U.S.-ROK Ulchi-Freedom Guardian exercise scheduled to begin in August be replaced by a South Korean government exercise that would be observed by senior U.S. officers, and that the Foal Eagle exercise, which involves coordinated naval and air operational exercises, be conducted "over the horizon" -- meaning farther away from the Korean Peninsula.

Moon quietly pressed his case with the Trump administration, requesting that Ulchi Freedom Guardian be carried out without "strategic assets" being included, and although it went almost unnoticed, the U.S. command in South Korea quietly agreed. The South Korean television network SBS reported on Aug. 18 that the United States had canceled the previously planned deployment of two U.S. aircraft carriers, a nuclear submarine and strategic bomber as part of the exercise at Moon's request.

Related Topic(s): Negotiation; North Korea; Olympics; South Korea; Trump Dangerous, Add Tags
Add to My Group(s)
Go To Commenting
The views expressed herein are the sole responsibility of the author and do not necessarily reflect those of this website or its editors.