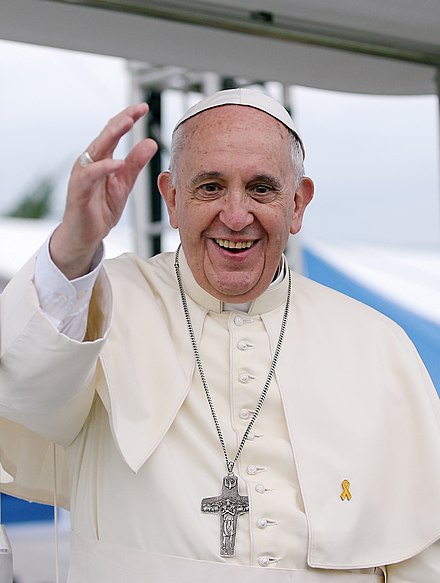 Duluth, Minnesota (OpEdNews) September 10, 2020: On the world stage, Pope Francis (born in 1936) has emerged as the scolder-in-chief. Pope Francis is the first Jesuit ever elected pope. Like most Jesuits, he tends to admire St. Ignatius Loyola and certain other early Jesuits such as St. Peter Faber (1506-1546).

Like the commander-in-chief of the "suckers" and "losers" in the armed services of the United States, President Donald ("Tweety") Trump (born in 1946), the scolder-in-chief frequently expresses himself in sharp contrasts - good versus evil, in which he often personifies evil as Satan. I know, I know, Pope Francis thinks he is being prophetic - in the tradition of such scolds as the ancient Hebrew prophet Amos.

Now, in the frame story in the book of Job, we meet a character referred to as Satan. But in that frame story about Satan, Satan is not portrayed as God's opponent. However, subsequently, Satan became a central character in the Christian imagination - down to the time of St. Ignatius Loyola (c.1491-1556), the founder of the Jesuit order and the author of the Spiritual Exercises, which includes the famous Meditation on Two Standards (standardized numbered sections 136-148): (1) the Standard of Jesus Christ and (2) the Standard of Satan.

Now, the Italian Jesuit Antonio Spadaro (born in 1966), the editor-in-chief of the Jesuit-sponsored magazine La Civilta Cattolica, has published a major article "Francis' Government: What is the driving force of his pontificate?":

Surprise, surprise! Our Jesuit interpreter says that the driving force in the Jesuit pope "comes from his personality, his own life and [his Jesuit] formation." In a nutshell, this is Fr. Spadaro's thesis about Pope Francis. So Fr. Spadaro promptly turns to discussing St. Ignatius Loyola.

"Let us take a step back to the time of the Council of Trent (1545-1563). Some Jesuits were present at its very beginning as theological experts: Frs. Diego Lainez and Alfonso Salmeron were designated to attend by Ignatius at the request of Pope Paul III. Claude Le Jay, the procurator of the Bishop of Augsburg, joined them. The founder of the Society of Jesus, St. Ignatius Loyola, instructed his confreres on how to behave.

"The interesting thing is that he did not go into doctrinal and theological questions at all. He was more concerned with the testimony of life that the Jesuits were to give. This already gives an initial indication of how Ignatius understood the reform of the Church, and in a context as singular and important as that of a General Council. For him, it was primarily a matter of reforming a matter of reforming people from within" (Spadaro's italics).

Now, my favorite scholar is the American Jesuit polymath Walter J. Ong (1912-2003; Ph.D. in English, Harvard University, 1955). He published the essay "Voice as Summons for Belief: Literature, Belief, and the Divided Self: in the now-defunct Jesuit-sponsored journal Thought: A Review of Culture and Idea (Fordham University Press), volume 33 (Spring 1958): pages 43-61.

In it (and elsewhere), Ong borrows the French Catholic existentialist philosopher and playwright Gabriel Marcel's distinction between belief "that" (a proposition is true) and belief "in" (a person).