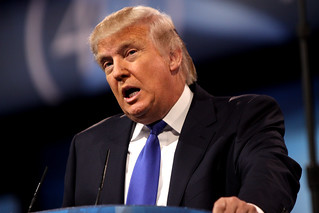 Many people might think that Donald Trump can only teach the country how to offend women, African Americans, and a range of non-European ethnic groups. While that may be his area of expertise, it seems that his rants on dealing with debt may actually provide a teachable moment. As a result, the country, and possibly even the policy elites, may get a better understanding of when and how debt can pose a problem.

Trump first raised the debt issue a couple of weeks ago when he implied that as president he would negotiate discounts on U.S. debt just like he did with many of his businesses that faced bankruptcy. In those cases Trump could tell his creditors that if they didn't make concessions, like accepting 50 cents on each dollar of debt, then he would go into bankruptcy. If a Trump business went into bankruptcy, the creditors might have to wait years to get anything and may end up with much less than the discount Trump proposed.

That might work for a business, but it doesn't make sense for a government like the United States, which has a perfect credit history and borrows in a currency it prints. Trump later made exactly this point. Of course since the U.S. government prints dollars, it is hard to see what it could mean for the country to go bankrupt, unless we forget how to use the printing presses.

The way we do debt accounting, the bond will still be counted at its notional value -- say $10,000. But it will be selling in the market for around $6,000. This means that we can borrow $6,000 and eliminate $10,000 in debt, for a net reduction in the national debt of $4,000. The interest burden will be largely unchanged, since we will be paying a higher interest rate, but on a smaller debt.

This prompts the obvious question, if we don't change the interest burden, why would anyone care that we lowered the notional value of the debt? The answer is that Washington debates on budget and economic policy are chock full of people who care hugely about the notional debt.

Some folks may recall that way back in 2010, Carmen Reinhart and Ken Rogoff, both prominent Harvard economists, published a paper claiming that if the ratio of debt-to-GDP crossed 90 percent, then growth went into the toilet. This finding was cited endlessly by leaders in both political parties and policy wonks everywhere, including the Very Serious People who inhabit the Washington Post editorial page.

While it later turned out that the Reinhart-Rogoff finding was driven by an Excel spreadsheet error, all sorts of very prominent people in policy debates still care hugely about debt-to-GDP ratios. For these people, the silly financial engineering described by Trump would be really brilliant policy. After all, if we care about debt-to-GDP ratios, and we can find a completely costless way to reduce it by 3-4 percentage points, why not do it?

Hopefully Donald Trump has helped everyone see that the concern about debt-to-GDP ratios was silly, no matter how many Harvard economists and other highly credentialed people pushed it. The real concern is the extent to which we are seeing rising interest burdens. On that front, the deficit mongers are completely off-track. Our interest burden, net of refunds from the Federal Reserve Board, is just 0.8 percent of GDP. That's down from more than 3.0 percent of GDP in the early 1990s.

But commitments of interest payments are just one way in which the government commits the country's future income. Another much larger form of commitment is the rents that private individuals and corporations will earn from the patent and copyright monopolies that the government granted them. These rents are the difference between the monopoly price and free market price. In the case of prescription drugs alone, the rents are now in the neighborhood of $380 billion annually or more than 2.0 percent of GDP.

This is effectively the money the government paid the drug companies to do research. Add in the higher price for patents in other areas and copyrights on everything from software to computer games, and we may be talking about more than $1 trillion a year (@5.5 percent of GDP). That is a huge burden that we are passing on to our children.

Of course the country will also be richer in the future, so our children may be able to pay these rents. Which brings us to the real moral of the story: we pass on a whole society, with a physical, social, and natural infrastructure. Anyone who tries to evaluate generational equity by the size of our national debt is clearly clueless and should be laughed off the stage more quickly than Donald Trump.

Dr. Dean Baker is a macroeconomist and Co-Director of the Center for Economic and Policy Research in Washington, D.C. He previously worked as a senior economist at the Economic Policy Institute and an assistant professor at Bucknell University. (more...)
Related Topic(s): National Debt -Trade Deficit; National Debt Interest; Trump Tax Plan, Add Tags
Add to My Group(s)
Go To Commenting
The views expressed herein are the sole responsibility of the author and do not necessarily reflect those of this website or its editors.