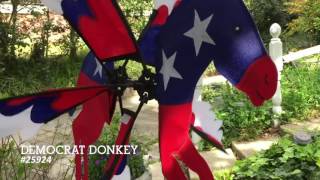 As both parties gear up for the 2018 elections, Democrats harbor high hopes for a wave election that will take back the Congress, put the Senate in play, and revive their party's fortunes in state legislatures across the country.

All Democrats agree a clear statement of what the party stands for is vital for success. The question is whether their candidates will carry the populist agenda and message they need and the times demand, in spite of the same old big-money politics the party pros insist they cannot do without.

Despite a strong economy and low unemployment, the possibility of a wave election tantalizes. Trump is remarkably unpopular, and scholars suggest presidential approval or disapproval is a far more important factor in midterm elections than the state of the economy.

Democrats have also run well in special elections, buoyed by surprising turnout of an aroused base. Republicans are alarmed by the number of incumbents trailing one or more challengers in the money race. This leads some Democratic "pros" to argue for business as usual: pick candidates that "fit their districts" and can raise money, they say. Run traditional campaigns, and count on the resistance to Trump to mobilize the base.

Yet Trump's rise in recent polls has suddenly sobered the premature partying. The "generic" ballot polling suggests that Republicans have closed what once was a double-digit deficit to Democrats. Current assessments also underestimate what is likely to be an unprecedented flood of money -- both reported and dark -- that will flood into contested races on the Republican side, as grateful donors and corporations reward Republicans for the tax cuts and regulatory fixes lavished upon them.

In the run-up to this March's special congressional election in southwest Pennsylvania (PA-18), for example, Republicans grew alarmed at early reporting showing the Democratic challenger was raising more money than the Republican in a district that Trump won by 20 points. So the Republican Congressional Committee mobilized conservative PACs and donors and flooded the district with paid operatives and wall-to-wall ads, outspending the Democrat five to one on TV in a district that they would expect to win in a walk. Whatever early money edge Democrats may have will evaporate this fall in contested races.

With Trump in the White House and Republicans in control of the Congress, the midterms will be nationalized. The Republicans' message is clear. They will run on a growing economy and low unemployment, claiming credit is due to the benefits -- more mythical than real -- from their tax cuts and regulatory rollback. They'll paint Democratic candidates as Pelosi's puppets, more interested in protecting "illegal immigrants" than in funding the nation's military.

The Democrats' message is distinctively less clear. Their current focus on the threat posed by Trump's lies and obstructions of justice, and the Russian interference in elections, will likely be magnified if special prosecutor Robert Mueller reports before the midterms. Trump's assault on decency, his racist posturing, and his assaults on women, Moslems, immigrants, the environment and more will and should be a centerpiece.

On the economy, Democrats are most comfortable championing jobs and growth. They'll criticize Trump for his failure to launch a serious infrastructure program, and for the assault on Obamacare, Medicare and Medicaid.

Yes, the economy is growing, and unemployment is low. But wages remain stagnant. This economy still doesn't work well for most Americans. More and more find it hard to afford basic security -- health care, housing, education, retirement security. So unless this panorama changes, the real question to ask is why even a growing economy doesn't relieve the harsh struggles facing working and poor people.

Trump is vulnerable for abandoning virtually all of the populist promises he made during the campaign. His celebrated tax bill gives corporations a permanent incentive to move jobs or report profits abroad, while larding the rich and big corporations with the bulk of the loot.

His assaults on regulation and enforcement weaken protections of consumers, minorities, women, and the environment against the depredations of corporations and the wealthy. Instead of cleaning out the swamp, he's savaged public service while giving corporate lobbyists the keys to the city. Instead of ending "stupid wars," he's doubled down on them, with U.S. forces dispatched to a stunning 168 countries in his first year in office.

Democratic candidates who combine this indictment with a bold agenda focused on redressing the rigged economy will find the greatest traction. Yet Rep. Joe Kennedy's widely praised response to Trump's State of the Union reveals how hesitant Democrats are in making this case.

Kennedy painted a compelling picture of the "fractured fault lines" of America. He argued that "the administration" -- Trump is not mentioned by name -- forces "false choices" -- between coal miners and single moms, rural and urban, coastal and heartland. Democrats instead "choose both."

Related Topic(s): 2018; Democrats Progressive; Donors; Jobs; Medicaid; Medicare; Politics; Taxes, Add Tags
Add to My Group(s)
Go To Commenting
The views expressed herein are the sole responsibility of the author and do not necessarily reflect those of this website or its editors.