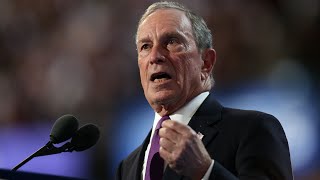 Michael Bloomberg, the billionaire who bought himself a mayoralty, now has his sights set on higher office. He became mayor of New York City in 2001, after outspending his opponent five to one from his personal bank account. Could the same arithmetic apply to the presidential race? If so, it would cost him $12 billion to buy the Oval Office. That is, of course, a disturbing and absurd notion to anyone with even a vestigial attachment to democratic principle.

Here's something even more ridiculous: Bloomberg can easily afford it. The total cost of the last presidential election was estimated at $2.6 billion. Think about it: Bloomberg could spend five times as much as all the presidential campaigns spent together last time around, and he's still be one of the richest people in the world.

He's providing a public service in one way. Michael Bloomberg has become a living illustration of our broken economic and political system.

Bloomberg was a Democrat, became a Republican, and is now a Democrat again. That is, however, a petty thing in his world. The ultra-wealthy might change party affiliations and contributions on a whim, or for convenience's sake, much as a gentleman might wear a tan linen suit in the summer and switch to darker wool blends as the autumn chill sets in.

Let's do the math, shall we? As the New York Times reported in 2009, Bloomberg spent $74 million to win the mayoralty in 2001, outspending his Democratic opponent five-to-one. He spent $85 million to win re-election in 2005. In an autocratic move, Bloomberg then managed to void the two-term limit for New York City mayors and went on to spend $102 million winning his third term in office.

As the Times notes, that means Bloomberg spent $185 for every vote he received. Additional calculations by this writer show that he spent a total of $88 for every vote cast in his races for any candidate.

We now enter the world of speculation. How much would it cost Bloomberg to become president, if we assume that every vote in the country "costs" as much as a New Yorker's? 136,700,000 people voted in the 2016 election. If turnout is unchanged, and the election can be purchased for $88 per vote, the cost of buying the United States presidency is $12 billion.

Not that it would be easy. Despite his wealth, Bloomberg retains his deeply dislikable public persona. I have never seen him in person, but I have observed him as most voters would, through the media lens. Even the highest-paid consultants the one who told the officious Bloomberg to call himself "Mike," even though he is never addressed that way have not figured out how to alter his self-presentation as a scowling, self-righteous martinet.

If beating Trump is your top priority, Bloomberg's not your guy, even in our broken simulacrum of democracy. His nomination would depress turnout among core Democratic voters. If you think he'd bring over some "persuadable" Republicans, guess again. Republicans have proven far more attached to Trump than insiders and pundits expected. And if impeachment results in a different GOP candidate for 2020 not likely, but not impossible the entire rationale for a Bloomberg candidacy disappears.

Still, if anybody can buy this election with personal funds, "Mike" can. He is one of the richest people in the world. According to Forbes, a source that is hardly hostile to the wealthy, Bloomberg currently has a net worth of $52.3 billion. He may have certain restrictions on his investments and assets, but borrowing against them would be easy.

(The use of the word "worth" in this context is, of course, is meant in a fiscal context, not a human one.)

Imagine, then, what a Bloomberg presidency might look like. True, he's good on guns, but his imperious presentation of policy is likely to win few converts. His environmental policy is lackluster. His views on the economy are the retrograde ravings of an isolated oligarch. He is reportedly snippy, judgmental, and imperious toward those with whom he disagrees. Inequality soared in Bloomberg's New York City, which quickly became unaffordable for working people and extremely lucrative for others.

When Bloomberg spoke to an assembly of fellow executives in 2018, an observer noted that he said we need to "go back to how things were done in Clinton days, when he'd get three Democrats, three Republicans and take them golfing, then go lock themselves in a room, close the door, smoke cigars and make all the decisions."

Related Topic(s): Election 2020; Elections Issues; Forbes; Inequality; Michael Bloomberg; Money, Add Tags
Add to My Group(s)
Go To Commenting
The views expressed herein are the sole responsibility of the author and do not necessarily reflect those of this website or its editors.