Despite losing in 2016, he triumphed in other ways. Ironically, his success four years ago may impede his second candidacy 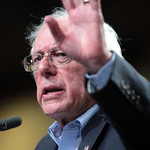 It's easy to forget the condescension and amusement that greeted him
when he announced his first campaign for president, in May 2015.

How, it was asked, could a rumpled, 73-year-old, self-described Democratic socialist a junior senator from tiny Vermont, who was born in Brooklyn, Jewish, hadn't even been a Democrat for most of his political career and eschewed money from Super Pacs possibly triumph against Hillary Clinton?

In the end, he didn't. But he triumphed in other ways.

Sanders won a surprising 46% of the pledged delegates to the Democratic national convention. His primary campaign had whipped up a storm of enthusiasm among young people and grassroots activists. He garnered more than 1m individual donations, including $20m in January 2016 alone ($5m more than Clinton), with an average individual donation of $27.

Most importantly, he showed Democrats they could run successfully on policies like Medicare for all, free public higher education, and higher taxes on the wealthy instead of the cautious "New Democrat" centrism of Bill Clinton, Al Gore, John Kerry and Barack Obama.

Sanders put "progressive" back into the Democratic party of Franklin D Roosevelt.

Now, ironically, his success four years ago may impede his second candidacy. Not only is he four years older, Sanders is no longer the only progressive in town.

And partly because of his success at mobilizing and energizing Democrats in the 2016 primaries, a slew of other presidential hopefuls are approaching the 2020 primary campaign the same way foregoing big money, talking up the importance of reviving democracy, using social media and advancing ideas that would once have been considered too radical.

The conventional view is Sanders helped move the Democratic party to the "left".

Wrong. Even before his primary campaign, American politics was moving away from the old right-left divide between "small government" conservatives from "big government" liberals.

Sanders helped reveal a new and deeper political divide in America between oligarchy and democracy.

Related Topic(s): Bernie Sanders; Bernie Sanders 2020 Presidential Candidate; Democracy; Democrats, Add Tags
Add to My Group(s)
Go To Commenting
The views expressed herein are the sole responsibility of the author and do not necessarily reflect those of this website or its editors.