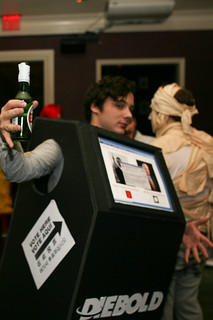 Bernie Sanders has shown in Iowa that he's a viable candidate " and more. Considering Bernie was down 50 points just a while ago, Iowa has sent a clear signal that this campaign must be taken seriously.

But the terrain will quickly shift. Bernie will obviously do well in New Hampshire. Then the race will move to southern and bigger states, where Hillary may have an edge.

But we're not talking about demographics. The real terrain shift that concerns us is from a caucus state to ones where the votes are counted on electronic voting machines.

The key strategy in question is "strip and flip," i.e., the stripping of electronic registration lists, and then the flipping of the vote count on machines that have no reliable system of verification.

As Greg Palast has reported, the Republicans are now stripping the electronic voter rolls in some two dozen states. The primary program is "Crosscheck," which strips citizens with the same or similar names from voter rolls in different jurisdictions, with the excuse that these citizens will otherwise illegally vote twice. Palast reports that once again in 2016, large numbers of voters have been targeted for being stripped. He also found that many of the names being purged don't entirely match " and that despite the premise that these people might have voted twice in the past (and plan to again) no attempt is ever made to investigate their "crime."

Of course, the primary disqualifying factor is skin color or ethnicity. The vast bulk of those being stripped from the voter rolls are African-American and Hispanic.

Palast reported in 2000 that more than 90,000 such voters were stripped from the voter rolls in Florida using a computer program that falsely tagged black citizens as ex-felons, ineligible to vote. All were innocent. The stripping was done primarily by Jeb Bush, then Governor of Florida. His brother George W's alleged margin of "victory" was less than 600 votes.

In Ohio 2004, we reported at www.freepress.org that Republican election officials stripped more than 300,000 primarily urban, non-white citizens from the voter rolls. Bush's alleged margin of "victory" was less than 119,000 votes.

Neither Al Gore nor John Kerry, the losing candidates who actually won, have ever spoken publicly about this.

This decimation of the voter rolls has been repeated in numerous federal, state, and local elections since 2000, and is being enhanced in the lead-up to Election Day 2016.

In addition to electronic stripping, official turnout at the polls is gutted by using Jim Crow demands for photo and other ID, discrimination aimed primarily at citizens of color.

Officially, the voter turnout in 2014 was the lowest in history. But much of this "low turnout" was in fact due to electronic stripping and other means of denying minority ethnic and racial groups' ability to actually cast ballots.

Mimi Kennedy Kennedy is national advisory board chair of Progressive Democrats of America. She is an actress.
Related Topic(s): Bernie Sanders 2016 Presidential Candidate; Vote Flipping; Voting, Add Tags
Add to My Group(s)
Go To Commenting
The views expressed herein are the sole responsibility of the author and do not necessarily reflect those of this website or its editors.