"District and Personal Integrity. To maintain our integrity, we are committed to making decisions in the best interests of the District. We will avoid conflicts of interest and the appearance of impropriety."

Included on the agenda for the morning meeting of the Los Angeles Unified School District's (LAUSD) Board was an item described as "Employee Discipline/Dismissal/Release ." For grassroots activists fighting against the privatization of public education, it was ironic that Board Member Nick Melvoin would participate in this conversation given the ethics violations that were revealed by the publication of confidential California Charter School Association (CCSA) documents by Michael Kohlhaas dot org. Before the board retreated into closed session, these parents and grandparents of students enrolled in the district expressed their concerns by reading portions of these charter industry documents into the 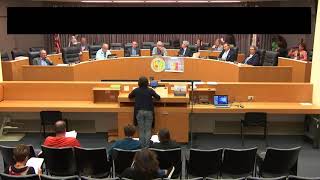 Regarding employee dismissals, item number two: should an attorney who is potentially in violation of California Bar Association professional and ethical codes be deciding on the performance of LAUSD employees? Many have suggested that at the very least Nick Melvoin should recuse himself until the results of the investigation are known.

We are here to read aloud into the record the emails unearthed by public records request that show school board member Nick Melvoin's active participation in crafting what would become the Student Performance Frameworkto benefit charter schools. As his colleagues noted at recent school board meetings in late September and October 2019, the SPF does NOT provide useful information about schoolsand in fact, more effort by the district should be put into developing parent and community understanding of the statewide LCAP dashboard.

If you have just listened to us speak, this is a swamp. Every time a charter backed majority gets into board office, the swamp refills; Deasy, Ref and now this. As a parent activist who is working to right the wrong of Proposition 13, I am asking you to investigate this matter.

I hope that Mr. Melvoin comes clean. We look forward to it and as your constituent, I hope that you get a clean bill of health on this.

At last count, 722 concerned citizens have signed the petition asking for an investigation to be opened into the conduct of Nick Melvoin. This effort has been backed by public schools advocate Diane Ravitchand promoted by United Teachers Los Angeles (UTLA). The LAUSD has yet to respond to this demand.

(Image by KLCS)   Details   DMCA
Carl Petersen is a parent, an advocate for students with special education needs, an elected member of the Northridge East Neighborhood Council and was a Green Party candidate in LAUSD's District 2 School Board race. During the campaign, he was endorsed by the Network for Public Education (NPE) Action and Dr. Diane Ravitch called him a "strong supporter of public schools." His past blogs can be found at www.ChangeTheLAUSD.com . Opinions are his own.

Related Topic(s): Public Education, Add Tags
Add to My Group(s)
Go To Commenting
The views expressed herein are the sole responsibility of the author and do not necessarily reflect those of this website or its editors.