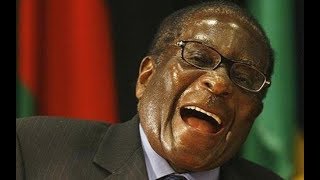 Zimbabwe's war veterans' association is staging a march today through the capital, Harare, demanding the resignation of President Robert Mugabe. Tens of thousands are expected to take part after all 10 of the country's provincial Zimbabwe African National Union -- Patriotic Front (ZANU-PF) branches passed motions of no confidence in Mugabe.

Mugabe refused to step down yesterday and was briefly released from house arrest to make his first public appearance since the army staged a palace coup early Wednesday.

His appearance in the role of chancellor of the Open University at a graduation ceremony in Harare was designed to lend an appearance of normalcy to an enforced transition of power to the faction of the ruling ZANU-PF led by its former vice president, Emmanuel Mnangagwa. The president's wife, Grace Mugabe, was not present at the ceremony.

Mugabe, now 93, sacked Mnangagwa last week to pave the way for Grace Mugabe, 52, to assume power. She heads the G40 faction of younger bourgeois layers in the ruling elite. The army, under the leadership of the Zimbabwe Defence Forces commander, General Constantino Chiwenga, moved to back Mnangagwa and call a halt to efforts by Mugabe to sideline or remove from office members of the old guard tied to the military.

The military issued statements via Zimbabwe state media stressing their respect for Mugabe and citing progress in talks "with the Commander-in-Chief President Robert Mugabe on the way forward." But the talks are being held at gunpoint and a senior member of ZANU-PF warned, "If he becomes stubborn, we will arrange for him to be fired on Sunday... When that is done, it's impeachment on Tuesday."

The chairman of the war veterans' association, Chris Mutsvangwa, a key ally of Mnangagwa, has been at the forefront of demands for Mugabe to go, and go quickly. Mutsvangwa boasted that "the war veterans of Zimbabwe" have the full support of the war veterans of South Africa, the government of South Africa... we are giving a very strong warning to Mugabe and his wife, he is done, finished. He won't be allowed to continue... He has to make a decision today to leave... If he doesn't leave, we will settle the scores tomorrow."

He told the media that three cabinet ministers under Mugabe -- Higher Education Minister Jonathan Moyo, Local Government Minister Saviour Kasukuwere and Finance Minister Ignatious Chombo -- "are in jail" along with others. Moyo was scheduled to attend the graduation ceremony with Mugabe, but did not appear.

According to various reports, Chombo was detained at the King George VI military barracks after a fire-fight that left several bodyguards dead, while Moyo is on the run. The minister of foreign affairs, Walter Mzembi, has not returned from a trip to neighbouring Zambia. Masvingo Provincial Affairs Minister, Paul Chimedza, was arrested on Thursday at an army roadblock. Unconfirmed reports say that the Women's League secretary for administration, Letina Undengem, is also detained.

Central Intelligence Organization Director Albert Miles Nguluvhe was released on Thursday, with a senior military official stating that he was not a member of the G40 faction and that he had been arrested to "alienate him" from the president.

ZANU-PF National Youth League Secretary Kudzanai Chipanga is in military custody. He made a televised apology to military chief Chiwenga for criticizing his earlier threats to intervene to stop purges within the party leadership. "We are still young people. We are still growing up and learning from our mistakes," he said.

The army maintains a blockade around key buildings, including the presidential palace as well as Mugabe's own home -- site of current negotiations between Mugabe and Chiwenga, brokered by South African Minister of Defence Nosiviwe Mapisa-Nqakula and State Security Minister Bongani Bongo. Mnangagwa fled to South Africa after being removed from his post by Mugabe.

Lending its backing to the military alongside the ANC government of Jacob Zuma is China. Beijing said Thursday that its "friendly policy" toward Zimbabwe would not change. Foreign Ministry spokesman Geng Shuang told a daily news briefing in Beijing: "We will continue to develop friendly cooperation with Zimbabwe on an equal, mutually beneficial win-win cooperation principle."

Several news sources, including CNN and Britain's Guardian, expressed concern that China was behind the coup and would be its main beneficiary. Noting the visit to Beijing last Friday by Chiwenga, Simon Tisdall listed China's "extensive investments in the mining, agriculture, energy and construction sectors," claiming that the "pre-independence guerrilla force led to victory by Robert Mugabe... was financed and armed by the Chinese in the 1970s. Close ties have continued to the present day."

Chris Marsden's work can be found on wsws.org, a website dedicated to global awareness of socialist issues & which serves as the forum for the International Committee of the Fourth International (ICFI).
Related Topic(s): Coup; Forced Evacuation; Impeachment; Military; Robert Mugabe; Zimbabwe, Add Tags
Add to My Group(s)
Go To Commenting
The views expressed herein are the sole responsibility of the author and do not necessarily reflect those of this website or its editors.