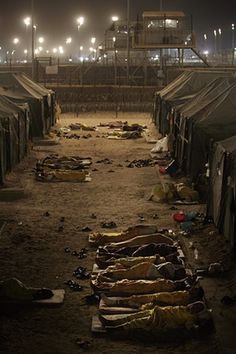 President Trump said Al-Baghdadi, the founder of ISIS, was fleeing U.S. military forces, in a tunnel, and then killed himself by detonating a suicide vest he wore.

In 2004, Al-Baghdadi had been captured by U.S. forces and, for 10 months, imprisoned in both Abu Ghraib and Camp Bucca.

I visited Camp Bucca in January, 2004 when, still under construction, the Camp was a network of tents, south of Basra, in an isolated, miserable area of Iraq.

Before our three-person Voices delegation entered Iraq, that month, we waited for visas in Amman, Jordan. While there, two young Palestinian men visited us and described their experiences during six months of imprisonment in Camp Bucca. Recalling the horrible experience, they remembered how fearful they felt, sleeping in sand infested with desert scorpions; they were paraded naked, for showers, in front of U.S. military women and told to bark like a dog or say "I love George Bush" before their empty bowls would be filled with food. Unable to communicate with anyone outside the prison, they could only hope for release when their turn finally came to appear before a three-person Tribunal.

Five of their friends were still in the prison. They begged us to visit these friends and plead for their release. All of them were Palestinians studying for professional degrees in Baghdad. Reluctant to lose their chances of eventually graduating, they took a risk and remained in Baghdad throughout the 2003 Shock and Awe bombing. U.S. marines arrived at their dormitory on Baghdad's Haifa Street and systematically rounded up students with foreign IDs. They were tagged as TCNs, "Third Country Nationals," and herded off to various prisons.

In Baghdad, our friends in the Christian Peacemaker Teams had already developed a data base of names and prison numbers to help Iraqis discover the whereabouts of missing relatives. They found the prison numbers for two of the young men we were asked to visit and advised us to ask for Major Garrity, a U.S. military officer who was in charge of Camp Bucca.

We traveled to the southernmost town in Iraq, Umm Qasr, and sat on a weathered picnic table outside of Camp Bucca, awaiting Major Garrity's decision. Prospects were bleak since we learned, upon arrival, that we'd come after visiting hours and the next day to visit was three days later. There was no shade, the sand was coated with black grease, and we constantly spat small black flies out of our mouths. Camp Bucca was one of the most hellish spots I've ever encountered. Yet we felt quite grateful when word arrived that Major Garrity had approved our visit.

A military pick-up truck drove us across an expanse of sand, and soon we were witnessing a tearful, tender embrace between one of the prisoners and his brother, a dentist from Baghdad, who had accompanied us. With no prompting, the prisoners, all in their twenties, corroborated the grievances their previously released friends expressed. They spoke of loneliness, monotony, humiliation and the fearful uncertainty prisoners face when held without charge by a hostile power with no evident plans to release them.

They were, however, relieved to know we could tell their relatives we had met with them. Later, Major Garrity said the outlook for them being released wasn't very positive. "Be glad they're here with us and not in Baghdad," she said, giving us a knowing look. "We give them food, clothes and shelter here. Be glad that they're not in Baghdad." Later, in May of 2004, CNN released pictures from the Abu Ghraib prison. We began to understand what she meant.

The November 3, 2005 issue of the New York Review of Books quoted three officers, two of them non-commissioned, stationed with the U.S. Army's 82nd Airborne Division at Forward Operating Base (FOB) Mercury in Iraq.

"Speaking on condition of anonymity, they described in multiple interviews with Human Rights Watch how their battalion in 2003-2004 routinely used physical and mental torture as a means of intelligence gathering and for stress relief... Detainees in Iraq were consistently referred to as PUCs. The torture of detainees reportedly was so widespread and accepted that it became a means of stress relief, where soldiers would go to the PUC tent on their off-hours to 'f**k a PUC' or 'smoke a PUC.' 'F**king a PUC' referred to beating a detainee, while 'smoking a PUC' referred to forced physical exertion sometimes to the point of unconsciousness.

"'Smoking' was not limited to stress relief but was central to the interrogation system employed by the 82nd Airborne Division at FOB Mercury. Officers and NCOs from the Military Intelligence unit would direct guards to 'smoke' the detainees prior to an interrogation, and would direct that certain detainees were not to receive sleep, water, or food beyond crackers. Directed 'smoking' would last for the 12 to 24 hours prior to an interrogation. As one soldier put it: '[The military intelligence officer] said he wanted the PUCs so fatigued, so smoked, so demoralized that they want to cooperate.'"

A sergeant told Human Rights Watch, "If he's a good guy, you know, now he's a bad guy because of the way we treated him."

The violence that brought the Islamic State into being has a long history.

In numerous trips to Iraq from 1996 to 2003, our Voices delegation members grew to understand the unbearable weariness and suffering of Iraqi families eking out an uncertain existence under punishing economic sanctions. Between the wars, the death toll in children's lives alone, from externally imposed economic collapse and from the blockade of food, medicine, water purification supplies and other essentials of survival, was estimated by the U.N. at 5,000 children a month, an estimate accepted without question by U.S. officials.

Related Topic(s): Camp Bucca; Children; Iraq; Iraq Casualties; Suffering, Add Tags
Add to My Group(s)
Go To Commenting
The views expressed herein are the sole responsibility of the author and do not necessarily reflect those of this website or its editors.