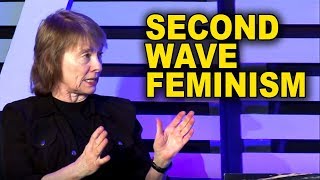 Camille Paglia Destroys Second Wave Feminism in Under 5 Minutes Camille Anna Paglia (born April 2, 1947) is an American academic and social critic. Paglia has been a professor at the University of the Arts in Philadelphia, ...
(Image by YouTube, Channel: PhilosophyInsights)   Details   DMCA

Duluth, Minnesota (OpEdNews) November 28, 2018: Camille Paglia (born in 1947), university professor of humanities and media studies at the University of the Arts in Philadelphia, Pennsylvania (USA), has published a new collection of essays in the book Provocations: Collected Essays (Pantheon Books, 2018). In it, she says, "Provocations covers the two and a half decades since my last general collection, Vamps & Tramps, in 1994" (page xi). Her new collection includes fifty-six relatively short essays plus the lengthy compilation of material in the appendix titled "A Media Chronicle [from 1976 to 2018]" (pages 581-681).

Now, if all you're looking for are provocations, I imagine that you'll not be disappointed with the selections in Paglia's new book. She is a stylist, and she expresses her views with panache. Her provocations can serve to alert you to issues, people, and points of view that you may not find expressed elsewhere in popular commentary in outlets approved by the high-brow gatekeepers in American culture today.

Now, in my estimate, Paglia's views about those eight topics/themes cannot be categorized as consistently "blue" or consistently "red." For example, she says that she is a Democrat and that she supported Senator Bernie Sanders of Vermont in the Democratic primary. So color her "blue" in her political leanings. But some of her other views are decidedly libertarian ("red") -- most notably in her polemics with so-called sex-negative feminists. (More on the feminist debate between sex-negative and sex-positive feminists below.)

In any event, I now want to contextualize Paglia's thought -- and comment on her thought.

Disclosure: For many years, Paglia and I both served on the editorial advisory board of the refereed journal Explorations in Media Ecology, published by the Media Ecology Association. The two most widely known authors associated with media ecology are the Canadian Renaissance specialist and cultural historian Marshall McLuhan (1911-1980) in English at St. Mike's at the University of Toronto in Canada, author of the book The Gutenberg Galaxy: The Making of Typographic Man (University of Toronto Press, 1962) and of the book Understanding Media: The Extensions of Man (McGraw-Hill, 1964), and his American popularizer and commentator on popular culture Neil Postman (1931-2003), who started the graduate program in media ecology at New York University (NYU), author of the book Amusing Ourselves to Death: Public Discourse in the Age of Show Business, 2nd ed. (Penguin Books, 2006; orig. ed., 1985). (I discuss McLuhan and Postman further below.)

Now, Paglia established her intellectual credentials with the book Sexual Personae: Art and Decadence from Nefertiti to Emily Dickinson (Yale University Press, 1990), the revised and expanded version of her doctoral dissertation in English under the direction of the prolific Harold Bloom at Yale University.

But we should note that Paglia in Sexual Personae does not mention or engage or challenge the French feminist existentialist philosopher Simone de Beauvoir's thought in her influential book The Second Sex, translated and edited by H. M. Parshley (Knopf, 1953; orig. French ed., 1949), a book that influenced the women's liberation movement (known as second-wave feminism) in the United States -- well before post-modernist and post-structuralist thought became fashionable at Yale and other elite universities in the United States.

Chloe Taylor, a feminist philosophy professor and Foucault scholar at the University of Alberta in Canada, carefully and accessibly discusses Foucault's thought in her 2017 book The Routledge Guidebook to Foucault's The History of Sexuality (Routledge). She received her Ph.D. in philosophy from the University of Toronto, and she published her doctoral dissertation as the book The Culture of Confession from Augustine to Foucault: A Genealogy of the "Confession Animal" (Routledge, 2009).

Related Topic(s): Culture; Feminism; History; Philosophy; Religion; Sex; Sex; Sexuality, Add Tags
Add to My Group(s)
Go To Commenting
The views expressed herein are the sole responsibility of the author and do not necessarily reflect those of this website or its editors.