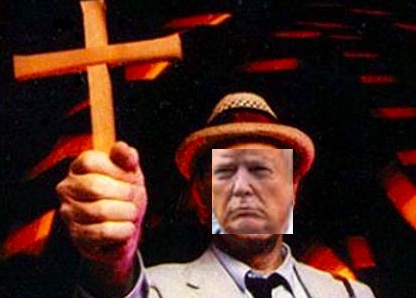 The wretched and ignorant former governor of Wisconsin, Scott Walker, has praised President Trump for his "courage" in supposedly "braving" protesters in the nation's capital to walk across Lafayette Park from the White House and stand, Bible in hand, in front of a small chapel.

The sycophantic Walker, who never graduated college and so might be excused for lacking awareness of things that happened before he was three years old, claimed in a Tweet that it was "Hard to imagine any other @POTUS [president] having the guts to walk out of the White House like this."

It's time for a little history, and a discussion of what is and is not courage.

The truth is that another president did exactly what Walker says it's "hard to imagine" someone doing. It was Richard Nixon, certainly not a president I have anything good to say about. But in fact, even crooked Tricky Dick looks good in comparison to the current denizen of the White House.

The difference between what these two Republican presidents did 50 years apart is striking.

Trump, who earlier this week huddled with Secret Service officers in the security of a White House bunker designed to survive a nuclear attack as Washington was convulsed in an uprising of angry black, white and brown people outraged at the nation's militarized police and the brutalizing and murdering of blacks following the cop killing of George Floyd in Minneapolis, wanted to show he wasn't hiding out. He decided to do this by walking outside the White House's secure fenced-in and heavily guarded compound to a conveniently nearby chapel for a bizarre photo op.

But before attempting this little outing, he ordered Washington National Guardsmen and National Park Police to use force to drive peacefully assembled protesters from Lafayette Park, a traditional protest zone for all kinds of Americans expressing grievances against the US government. The troops and the park police obliged by assaulting the protesters (and journalists covering the protest) without warning using tear gas, rubber bullets and even flash-bang grenades.

When the whole area around the White House and the pathway to the historic St. John's Episcopal Church and Parish House across the park and Pennsylvania Avenue had been cleared and a military perimeter established around the entire White House, Trump and a retinue of White House staff and Department Secretaries as well as the head of the Joint Chiefs of Staff, ambled over to the church where the 'brave' president had photographs taken of him in front of the church holding up a Bible like some B-movie preacher trying to ward off a vampire.

There wasn't a lot of courage required for any of that.

Nixon's exploit was something else altogether.