Despite of African governments declaring tuberculosis (TB) as an emergency, Africa as a region, faces the largest funding gap of USD 10.7 billion to fully implement the Global Plan to Stop TB by 2015. This fact came in spotlight when the TB funding in Africa required to meet the TB-related targets of millennium development goals (MDG) by 2015 was analyzed, said Kenyan activist Lucy Chesire at the 3rd Stop TB Partners' Forum in Rio de Janeiro, Brazil (23-25 March 2009).

"The Ministers of health had recognized that TB is an emergency, but they don't act to mobilize resources to respond urgently to control TB and fully implement the Global Plan to Stop TB" stressed Lucy. 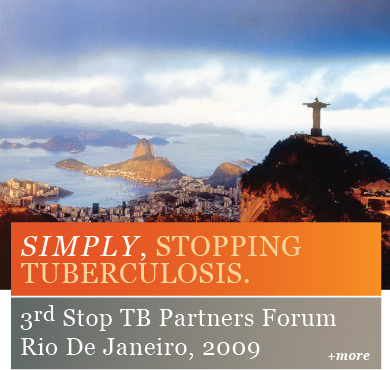 The countries in Africa had achieved a milestone by endorsing the African Union Abuja pledge of allocating 15% of national budgets to health, which was also reiterated at the 2008 African Union Summit in Egypt, the 2008 Conference of African Finance Ministers, and 2008 Special Conference of African Health Ministers. But they have failed to act on this pledge, said the activists. Only Botswana has kept the promise of allocating 15% of the national budget to health, the rest of the countries in Africa need to keep their promises.

"The current global economic crisis is all the more reason why high burden TB countries in Africa should invest in TB control. As per a report of World Bank and Stop TB Partnership (December 2007), high-burden TB countries are likely to recover 9-15 times of their investment in TB control" said Mayowa Joel of Nigeria. This report indicates that the economic cost of not treating TB to Africa between 2006 and 2015 would be USD 519 billion while TB can be controlled with USD 20 billion in the same period.

TB continues to be the leading killer of people living with HIV (PLHIV). The need for collaborative TB and HIV activities to respond to rising challenge of TB and HIV co-infection, is compelling. 22 high HIV prevalence countries with an estimated adult HIV prevalence rate equal to or greater than 4% are in Africa.

Five of the TB most affected countries: Nigeria, Ethiopia, South Africa, DRC and Kenya are all also amongst Africa's most highly populated countries, are all regional hubs or countries with the most number of common borders with other countries, says the activists.

Many organizations have signed on this call and those interested in signing on the call to Africa to fund the gap in TB control, can email Lucy Chesire at lucy_chesire@yahoo.com or Mayowa Joel at mayowajoel@yahoo.com

This call will be delivered to the Heads of State, ministers of Health and Finance at the forthcoming African Union summit in 2009.

Bobby Ramakant is a development journalist and has been writing on development issues since 1991. Health is one of the key focus areas he writes on. He is also a World Health Organization (WHO)'s WNTD awardee for 2008
Related Topic(s): Africa; Botswana; Brazil; Economic; Finance; Funding; Funding; Funding; Fundraising; Fundraising; (more...) Health; Health; People; People; Tuberculosis; World, Add Tags  (less...)
Add to My Group(s)
Go To Commenting
The views expressed herein are the sole responsibility of the author and do not necessarily reflect those of this website or its editors.