It is time to call the people who planned and executed the assault on the Capitol building terrorists-- domestic terrorists. They had every intention of doing damage and violence and they followed through on their intentions.

I've written this article in response to an article posted by a senior OEN editor.

That he posted an article which I disagree with in so many ways proves how open OEN is. 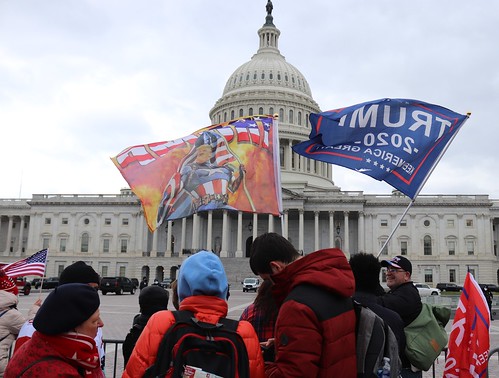 This article is bullshit in so many ways. Let's start with the blind or delusional claim that Trump did not encourage the action. Between Trump his son and Rudy Giuliani, the Trump Rally absolutely encouraged the violent, seditious insurrection. He nonsensically claims that Trump did not tell them to enter the Capitol building.

"Some 74 million people voted for Trump. What will they do if the Democrats now unfairly try to impeach him over an incident he did not cause?

Trump also didn't tell them to steal police plastic shields and use them to smash open windows. Trump did encourage them. Giuliani and Donald Trump Junior goaded them.

The writer says these people were tourists. Sorry but there is huge evidence in social media that these people planned and came to violently prevent confirmation of Biden as president and to start "the revolution."

Many did have weapons, some had pipe bombs, some had Molotov cocktails. Many had tear gas or related sprays. There is video showing these terrorists spraying police with some kind of gas. One moron killed himself by tazing his testicles, causing a heart attack. So add tasers to the list of weapons.

These seditious criminals and fools clearly announced in advance what they intended to do and it went beyond protest. The guy who infamously stole Speaker Pelosi's podium posted it on Ebay. How is he different that BLM protest looters who stole sneakers?

While in and around the Capitol, these seditious terrorists violently attacked police, killing one-- ironically one who was a Trump supporter. We see them, in the Capitol chanting anti-police messages.

The reason the Capitol was so poorly defended was probably because of Oath Keeper and Oath Keeper sympathetic police who let the rioters pass barriers, literally waving them on.

And I am sure there will be very heavy video surveillance, so, when these criminal fools come out, without masks, they will be identified and arrested, prosecuted and sentenced to jail time.

I have long supported peaceful civil disobedience. What happened at the Capitol was not peaceful disobedience. It was seditious insurrection with the intent to interfere with the constitutional Democratic process.

Related Topic(s): Capitol Riot; Homegrown Terrorism; Terrorism, Add Tags
Add to My Group(s)
Go To Commenting
The views expressed herein are the sole responsibility of the author and do not necessarily reflect those of this website or its editors.