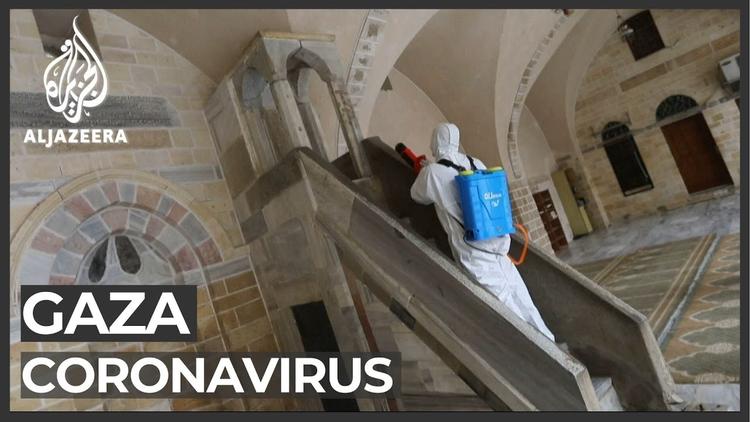 California prisons are releasing prisoners for fear that the crowded conditions in penitentiaries could prove deadly breeding grounds for the novel coronavirus.

There are two million prisoners, most of them not adults, however, who won't be let out of prison despite the dangers of over-crowding and externally dictated inadequate health facilities. They are the people of the Palestinian Gaza Strip, with a population size similar to Houston.

AFP reports that the two million Palestinians in Gaza only have 60 ICU or intensive care beds, and not all of them are functional. The Israeli blockade, which disallows importation of many key goods, has devastated the health care system in the Strip. In Palestine over all, there are only 1.2 hospital beds per 1,000 people. Compared to Germany with 8.3 beds per thousand people.

Health statistics are already bad in the Strip. Children suffer from poor nutrition. Its sole aquifer is polluted and sea water is seeping in, so that 90 percent of the water is undrinkable.

California prisons would be paradise next to a Gaza Strip being ravaged by Covid-19.

Jamal al-Khudari, head of Palestinians against the siege, has demanded that the Israeli blockade on the Strip be lifted and that the UN Relief and Works Agency, which provides medical and educational aid to Palestinians, be refunded by the US (Trump slashed the organization's funding).

Because the Israelis destroyed Gaza's airport and won't let its port operate, and restrict overland travel out of the Strip, Gaza is somewhat isolated and has not yet reported any virus cases. People do manage to travel in and out of the Strip, however, through Israeli or Egyptian checkpoints, and the likelihood is that at some point one will bring in the novel coronavirus that causes Covid-19.

The Palestinian health authority has put 637 persons returning recently from abroad under a two-week quarantine. Its officials say that no case of Covid-19 has so far been reported in the Strip. But with hundreds of returnees, there is a danger that their quarantine will be partial and that some are carriers, maybe even asymptomatic ones. People live in extended families in crowded conditions, so I'm not sure what a "quarantine" would consist of.

Doesn't sound promising to me.

Gaza had been a prosperous agricultural and trade center in the 19th century, connected to Egypt and to the Levant. Since 1967 it has been an Israeli colony. Since 2007 Israel, the Occupying Power, has put its inhabitants under an illegal blockade (illegal because under the Geneva Conventions, civilian noncombatants cannot have their lifeways substantially changed by the Occupiers). This step came because the fundamentalist party, Hamas, won the 2006 elections sponsored by the US and Israel. The following year the US and Israel tried to undo the results by conniving at a coup in the West Bank, which succeeded in bringing the secular PLO to power. But the attempt at a coup failed in Gaza, where Hamas remained in power. Most Western journalists tell this story bass-ackwards, accusing Hamas of "seizing power."

Israeli authorities propagandistically point to the thousands of small homemade rockets that have struck Israel from Gaza in the past 13 years, but don't mention that only a handful of them hit anything. All life is precious, and the 27 Israelis killed by those rockets from 2004 to 2014 are victims of war crimes by Palestinian groups (Hamas is just one). But Israelis in that period killed thousands of Palestinians in Gaza. Btselem found that from 2000 to 2014, Israel killed 7,065 Palestinians over all (including in the West Bank), while Palestinians were responsible for about a 7th of that number of Israeli deaths. In the past two years, Israeli snipers have just been shooting down protesting Palestinians in Gaza like fish in a barrel, killing over 200 (including children, women, journalists and medics, and unarmed demonstrators), and wounding thousands.

Moreover, if this conflict is set in history, one discovers that 70 percent of the families in Gaza were driven out of their homes in what is now southern Israel, to live in squalid refugee camps. Many could walk back home if they were not caged by the Israelis who stole their property without giving them any compensation.

Related Topic(s): California Prisons; Corona Virus Coronavirus Covid-19; Hamas; Israel; Palestinian; Pandemic; Prison Release, Add Tags
Add to My Group(s)
Go To Commenting
The views expressed herein are the sole responsibility of the author and do not necessarily reflect those of this website or its editors.