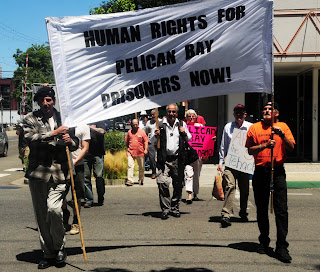 (ABOVE: Protest at CDCR headquarters in Sacramento on July 25, photo by Indybay.org)

On July 20, hunger strikers at California's infamous Supermax, Pelican Bay State Prison Secure Housing Unit (PBSP-SHU), declared victory and ended their nearly three-week fast for human rights. The strike had been announced several months beforehand and when it began on July 1, the hunger strikers at Pelican Bay were joined in the fast by thousands of other prisoners across the state. According to the California Department of Corrections and Rehabilitation (CDCR), at least 6,600 prisoners in at least one third of California's 33 prisons participated in the hunger strike.

In response to the hunger strike, Assemblymember Tom Ammiano and the Public Safety Committee in the State Assembly of California will hold an informational hearing on August 23 regarding conditions and policies of the Security Housing Units at Pelican Bay. Activists have initiated a statewide mobilization around this hearing, in order to pressure state legislators and the CDCR to make substantial changes.

A statement written by the Short Corridor Collective, composed of some Pelican Bay hunger strike leaders, explains that on July 1:

a collective group of PBSP-SHU inmates composed of all races began an indefinite hunger strike as a means of peacefully protesting 20-40 years of human rights violations.... The decision to strike was not made on a whim. It came about in response to years of subjection to progressively more primitive conditions and decades of isolation, sensory deprivation and total lack of normal human contact, with no end in sight. This reality, coupled with our prior ineffective collective filing of thousands of inmate grievances and hundreds of court actions to challenge such blatantly illegal policies and practices (as more fully detailed and supported by case law, in our formal complaint available online here) led to our conclusion that a peaceful protest via hunger strike was our only available avenue to expose what's really been going on here in CDCR-SHU prisons and to force meaningful change.... We ended the hunger strike the evening of July 20, 2011, on the basis of CDCR's top level administrators' interactions with our team of mediators, as well as with us directly, wherein they agreed to accede to a few small requests immediately, as a tangible good faith gesture in support of their assurance that all of our other issues will receive real attention, with meaningful changes being implemented over time."

On August 3, the Prisoner Hunger Strike Solidarity Coalition announced that it had just received a letter from the hunger strike leaders at Pelican Bay, dated July 24, explaining that strikers have given the California Department of Corrections and Reform (CDCR) a deadline of two to three weeks from July 20 to come up with some substantive changes in response to their five core demands. Todd Ashker, one of the leaders of the hunger strike, explains that if the CDCR does not follow through, prisoners at Pelican Bay plan to go back on hunger strike:

It's very important that our supporters know where we stand, and that CDCR knows that we're not going to go for any B.S. We remain as serious about our stand now as we were at the start, and mean what we said regarding an indefinite hunger strike peaceful protest until our demands are met. I repeat -' we're simply giving CDCR a brief grace period in response to their request for the opportunity to get [it] right in a timely fashion!

Hugo Pinell, one of the hunger strikers at Pelican Bay State Prison, has now been held in continuous solitary confinement for over 40 years--longer than any other US prisoner known to date. In a letter written during the strike to journalist Kiilu Nyasha, Pinell explained why he was fasting:

I have to get with it because it's for a great cause and if good changes come about, I could get a break too. At this point, a move to a mainline would be great, being that my keepers are determined to keep me until I die. On a mainline, we could have contact visits again! It's been too long since I've touched my Mom and all of my loved ones"I wasn't prepared for a hunger strike, so I don't know how well or how long I can hold on, but I had to participate"I don't even think in terms of doing or saying something wrong, for that would strike against everything I live for: freedom, becoming a new man and the New World. So, Sis, this hunger strike provides me with an opportunity for change while also allowing me to be in concert with, and in support of, all those willing to risk their precious and valuable health.

Our previous interview with Solitary Watch about the Pelican Bay hunger strike examined the broader issue of solitary confinement in prisons throughout the US. In this follow-up report, we place the strike in context, alongside a statewide grassroots movement calling for cuts in prison spending to address California's budget crisis, and a recent US Supreme Court ruling that calls for the reduction of California state prisoners by at least 30,000, in response to overcrowding.

We interviewed Isaac Ontiveros for an inside look from within California's anti-prison movement. Ontiveros is the Communications Director for Critical Resistance, a national organization that is working to abolish the prison-industrial complex and is a member of the Californians United for a Responsible Budget (CURB) alliance and the Prisoner Hunger Strike Solidarity Coalition.

Angola 3 News: What is the latest news from the hunger strikers?

Isaac Ontiveros: As far as we know, the leaders of the strike at Pelican Bay's Security Housing Unit have called an end to the strike--based on what they see as some movement on the part of the CDCR beginning to address some of their demands.

At the peak of the strike at least 6,600 prisoners across at least a third of California's 33 prisons participated. These are official CDCR numbers, so we can confidently assume actual numbers were higher. Right now, our struggle is to determine how many other prisoners, in what prisons, are continuing to strike. Given how isolated prisoners are throughout the system, this is a challenge, to say the least.

A3N: Why have the Pelican Bay hunger strikers declared victory?

IO: The prisoners made very important, historic gains. That the strikers were able to move the CDCR at all was no small feat, especially when working under some the most horrendous conditions possible. The fact that they were able to coordinate among themselves despite extreme isolation is also impressive. Furthermore, solidarity was able to spread throughout the California system. This solidarity crossed the racial and geographic lines that we are taught are uncrossable; and strike leaders were able to incite strong support of people outside of prison on an international level. This is all very important when we think about victories, especially if we understand victories as being stepping-stones to further and greater victories.

As far as the specific concessions made by the prison administration, the details are still coming, but it seems that CDCR has moved a bit on the prisoners demands around providing and expanding some of the privileges and programs they have access to in the SHU. These gains--for example, some around cold weather clothing and access to calendars--may seem modest, but for people in such extremely oppressive conditions, these things take on a different weight. Also, it seems like there could be some movement on some of their other demands, perhaps some review of the "debriefing" process.

Over 40 years ago in Louisiana, 3 young black men were silenced for trying to expose continued segregation, systematic corruption, and horrific abuse in the biggest prison in the US, an 18,000-acre former slave plantation called Angola. In 1972 and (more...)
Related Topic(s): AlterNet; California Politics; Critical Thinking; GrassRoots; Hunger Strike; Jail; Law; Oppression; Prison Industrial Complex; Prison Nation; (more...) Prison Violence; Prison-Prisoners; Prisoner Abuse; Prisons - Penal System; Protest; Resistance; Rights; Solidarity, Add Tags  (less...)
Add to My Group(s)
Go To Commenting
The views expressed herein are the sole responsibility of the author and do not necessarily reflect those of this website or its editors.