America's largest state is suffering one of its worst climate catastrophes to date, but the president refuses to see the obvious. 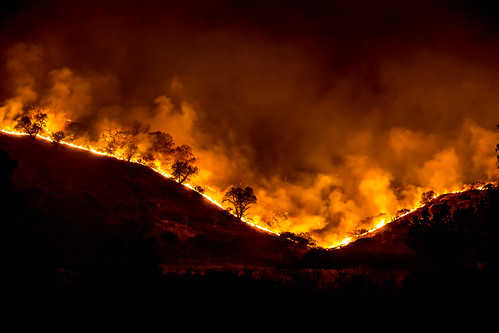 California's in the midst of the deadliest fire our state has ever suffered. As I write, there are 79 confirmed dead, and that number may grow as many more are missing. The Camp Fire also destroyed more structures than any fires before in our history.

An even larger area within the state is suffering from the smoke the fires are generating. It's not just unpleasant to breathe -- it's toxic.

I know that Donald Trump's expertise is not forest management, or California's ecosystems, or anything related to California's catastrophic wildfires. I know that he's spent his life on the other coast, so he's unfamiliar with our way of life out here.

That said, the man's got advisers.

No president is an expert in all things. A good president is skilled at choosing the right advisers and knowing when to weigh on them for help.

To non-Californians, let me provide a bit of background. Near the coast, we have chaparral and sage scrub ecosystems. Chaparral is sometimes referred to as "elfin forest" because it consists of shrubs that, to an elf, would look like a mighty forest.

You don't log chaparral or sage scrub. There are no trees. The closest thing to logging is when people harvest manzanita, often as decorative branches to put in parrot cages.

You can't really rake it either. It's too woody. Also, why would you? Why would anyone take a rake to millions of acres of wild lands?

Our ecosystems evolved to burn. Native Americans used fire as a management tool regularly. Some species need fire to germinate. Many species remain alive underground during a fire and then re-sprout afterward.

During the long, dry season, the plants go dormant and many look dead. It's basically kindling. When it rains again in the winter, they become green and lush with new growth.

To a large extent, the fires are natural. But there are a few ways in which human mismanagement contributes to them.

First, we spent decades suppressing fires instead of allowing them to burn. That led to a build-up of fuel that's only being gradually depleted as wild-land fires are allowed to burn today. We don't let all of the fires burn, but naturally caused fires that don't threaten human structures are now allowed to run their course.

Jill Richardson is pursuing a PhD in sociology at the University of Wisconsin-Madison.
Related Topic(s): California Fires; Climate; Firefighters; Trump Insults California; Trump Liar, Add Tags
Add to My Group(s)
Go To Commenting
The views expressed herein are the sole responsibility of the author and do not necessarily reflect those of this website or its editors.