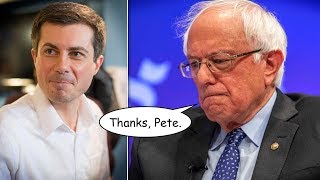 The around-the-clock fusillade of criticism directed at Bernie Sanders on cable news has switched into overdrive, synchronized precisely (hint, no coincidence) with Joe Biden's announcement of his candidacy for President.

BREAKING: "Biden is not only the prohibitive front-runner but he's also the presumptive nominee." After all, Donald Trump trolled him on Twitter so there you go, "it's over!"

Bernie who? Elizabeth what? Beto WTF, Pete what's his name? Kamala how do you pronounce it? We don't need no stinkin' healthcare, fair wage, social justice-talkin' leftist, Socialist candidates in this race no more. We have a real man, a real candidate, Joe (Big Joe) Biden.

If you listen to cable news long enough, you might really come to believe that what you see with your own two eyes isn't real at all. "But that sh*** as Jules said in Pulp Fiction, "ain't the truth." The truth is, on the strength of Bernie Sanders's 2016 campaign and his organizing efforts since then, the country has moved in a decidedly Progressive direction.

Not only have the voters adopted his perspectives, the other candidates in the race have as well, as has the Democratic Party as a whole. Joe Biden included.

Joe Biden's campaign is built on the foundational premise "He can win." One way Biden can win is if the two-thirds of Democratic primary voters who are backing Progressive candidates split their votes among the crowded Progressive field. Then Biden could win the Democratic nomination with 25%. That appears to be his best chance.

The majority of Democratic voters are going to vote for Progressive policies. The Fortune 500 propaganda oracles are going to promote Joe Biden. That's the truth.

Related Topic(s): Bernie Sanders; Bernie Sanders 2020; Progressives, Add Tags
Add to My Group(s)
Go To Commenting
The views expressed herein are the sole responsibility of the author and do not necessarily reflect those of this website or its editors.