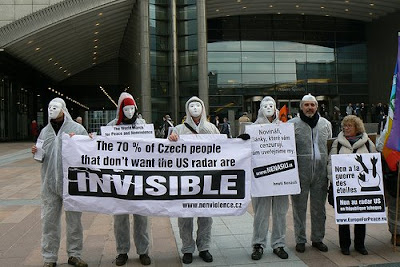 (Image by Unknown Owner)   Details   DMCA
The people are no longer invisible.

The government in the Czech Republic has fallen.

The Associated Press reports, "The lower house of Parliament voted 101-96 to declare no confidence in the three-party coalition government, after four lawmakers broke rank with their parties and voted with the opposition.

"The government has struggled to resolve deep divisions within Parliament over whether to allow components of a U.S. missile defense shield on Czech territory, and whether to adopt the EU reform treaty to streamline decision-making in the bloc."
In an email from Prague activist Jan Tamas he says, "For us it is a great victory: we knew that the only way to stop the installation of the US radar base was the fall of the government and we worked for more than 2 years in this direction with permanence and coherence. A government that represented the interests of the US military industry has fallen.
"Our work has been fundamental in encouraging the members of the Parliament who already were against the radar and to spread doubts in the ones who were in favor. And it was just the change of mind of some deputies that made the fall of the government possible. On the other hand, pressed by the hunger strike, the Social-Democratic Party had to take a clear position supporting us and this will make it more difficult for them in the future to change their opinion about the radar. The collaboration with the Communist Party, that has always supported our initiatives, has been decisive as well. Thanks to all of you for the support you gave us in many activities, support that was critical."
This is indeed a wonderful moment for the folks in the Czech Republic who have worked so hard to defeat the deployment of the US Star Wars radar. They should feel proud and it should be an example to all of us that determined activism, seemingly against all odds, can bear fruit.
Our best regards to our friends in the Czech Republic.

Related Topic(s): Activism; Czech Republic; Military; Peace; Wars, Add Tags
Add to My Group(s)
Go To Commenting
The views expressed herein are the sole responsibility of the author and do not necessarily reflect those of this website or its editors.