From the beginning of the COVID-19 crisis, Trump has tried to minimize the threat posed to the American people. In February, the president stated that the virus has only infected "15 people" and that "within a couple of days," that number would be "going to be down to close to zero." It has been a long couple of days.

Even now, with over 5.7 million Americans infected and over 175,000 people dead, the severity of the situation is not recognized. "It is what it is," Trump says.

Deemphasizing the severity of the crisis is a message that works with Trump's base. Many of these supporters have ignored their obligations to society and rebelled against wearing masks. They belittle those who do by claiming that they have given into fear. His followers hold onto the president's claim that COVID-19 is nothing more than a Hoax Virus and that the media has inflated the risk. The numbers tell a much different story.

When the death toll was "only" 150,000 (a mere two weeks ago), one Trump supporter declared that this was an insignificant number in a population of 354 million. However, the flaw in this "logic" is that comparing the number of people who died of COVID-19 against the number of people living does not provide any useful information. To understand the significance of the pandemic, one must look at how many people die in a typical year.

In 2017, there were 2,813,503 deaths in the United States. Therefore, six months into the crisis and COVID-19 has already claimed 6.22% of the deaths. With 1,000 more people dying every day and a lack of national leadership, this percentage will only increase as the year drags on. 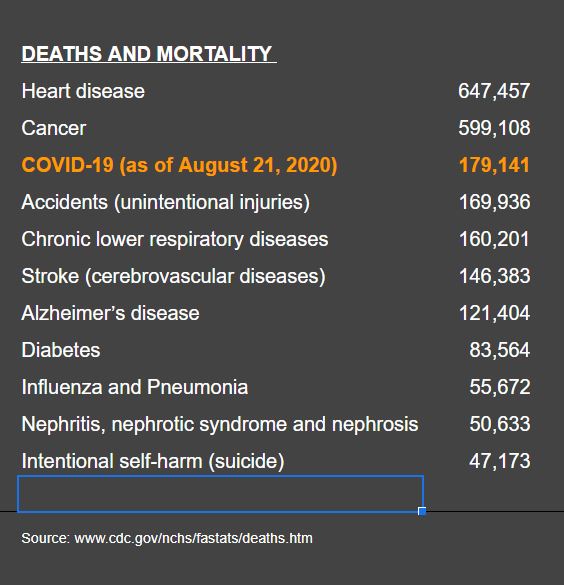 (Image by Carl J. Petersen)   Details   DMCA
Trump's supporters also question why so much attention is paid to COVID-19 when other diseases kill hundreds of thousands of people every year. This argument ignores the fact that most of the leading killers, like heart disease and cancer, are not infectious like COVID-19.

Behavior affects the number of deaths caused by accidents, so these provide a good comparison point to the pandemic. We have decided as a society to pass laws to help regulate behavior and reduce how many deaths occur. Are laws mandating the use of face coverings when in public any different than ones that limit how fast one can travel on the freeway?

Just six months into the crisis, COVID-19 already ranks as the third leading cause of death in the United States. Only heart disease and cancer are more lethal killers. Invalidating Trump's comparison of this new disease to the flu, there have already been almost three times the number of deaths by COVID-19 than yearly deaths due to influenza and pneumonia combined.

As the results of the pandemic threaten to sink his presidency, Trump has tried to defend himself by comparing his response to COVID-19 with crises that were faced by the Obama/Biden administration. The most cited is "the 2009 H1N1 pandemic [that] originated in the United States before spreading around the world". The number of cases of H1N1 that occurred in one year dwarfs COVID-19. However, the current pandemic is far deadlier as the 60.8 million cases of H1N1 were responsible for 12,469 deaths in the United States, seven percent of what we have experienced so far with COVID-19.

In 2014, Trump called for Obama's resignation when a doctor entered the United States after treating Ebola patients. While the doctor and one other person died, only two people contracted the disease in the United States. Neither of them died.

No one can blame Trump for the existence of the virus or deny that some deaths were inevitable. However, due to Trump's lack of action, the United States has suffered more than any other country. When we look back on the history of COVID-19, the number of Americans who died because of this ineptitude will be the number that matters the most.