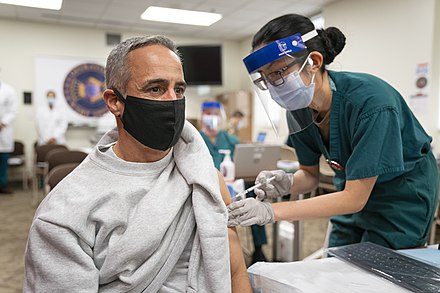 The Biden administration's coronavirus vaccination campaign is settling into the slow, difficult grind of persuading holdouts to get their shots, and in response, Republicans and the right-wing media are ratcheting up their anti-vax rhetoric to a point that is going to get someone killedand not just by COVID-19.

"We are under no illusions that each person in this stage will take longer to reach," an unnamed senior administration official was quoted by Politico. "The first 180 million were much easier than the next 5 million."

The administration remains committed to getting those next five million people vaccinated, though.

"Every person we can get vaccinated at this point is another person protected," the official said. "You've got to be realistic that people in this phase are going to take a little bit longer." That means trying to reach people where they are, in their neighborhoods and schools and workplaces, at their primary care doctors' offices -- wherever anyone can be reached.

Meanwhile, the urgency is only growing:

As we've seen, first cases grow, then hospitalizations grow, then deaths grow. If the U.S. goes down that path again, though, much of the death will be wholly unnecessary. In June, 99% of people in the U.S. who died of COVID-19 were unvaccinated. Another wave of deaths, if it comes, will be a partisan affair thanks to Republican vaccine resistance. There are other groups with low vaccination rates, but they have reasons better than getting COVID-19 to own the libs and show loyalty to Donald Trump: people who don't have sick leave may be worried about losing a day's pay to side effects.

The U.S. medical system leaves people reasonably afraid of surprise bills, so assurances that the vaccine is free may not be getting through to people. Children under 12 cannot yet be vaccinated. And, of course, some immuno-compromised people may be vaccinated but still have low protection.

Related Topic(s): Covid-19; Republican; Vaccinations; Wall Street Greed; Warning, Add Tags
Add to My Group(s)
Go To Commenting
The views expressed herein are the sole responsibility of the author and do not necessarily reflect those of this website or its editors.