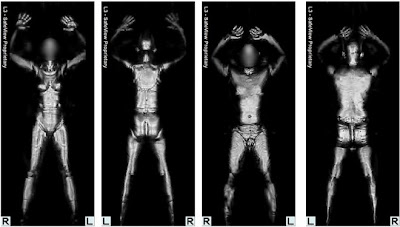 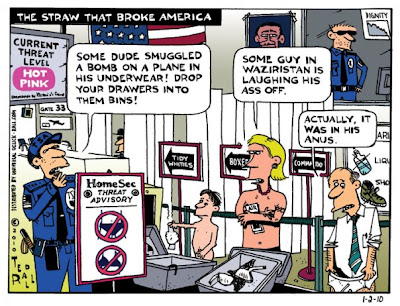 (Image by Unknown Owner)   Details   DMCA
It's a brilliant strategy if you think about it. Make the public afraid of each other. Every person could be a terrorist - everyone is suspect. There is no better way to defeat an organized anti-war opposition than to make the people terrified of each other.

The corporate oligarchy is now doing under Obama what it could not accomplish under Bush. Total war. The anti-Bush movement in the US and worldwide was gaining too much ground. So the oligarchy let the air out of that balloon. In Bush's place they put in a magician who has proved very effective at keeping the left off balance and thus unable to pump new life into the reeling anti-war movement.

So now it's Iraq, Afghanistan and Pakistan. Somalia and Yemen. Next could be Turkmenistan, Uzbekistan, Tajikistan, and Kyrgyzstan. National Public Radio (NPR) reporter Tom Gjelten did a story called "Afghan War Could Spill Over Into Central Asia" on December 31 that upped the fear meter and brought back the Vietnam-war era worry of the "domino theory". You must watch the slight of hand.... the modus operandi in action again.

Bush, or John McCain for that matter, would have been resisted at every step of this new escalation. But many "progressives" are frozen into place by the handiwork of the magician and a deferential Congress under the control of the other war party. The "execution" of this masterstroke has worked as well as the insides of an expensive Swiss watch.

The oil and military industrial oligarchy have created a situation where the public is so primed for fear by the slavish media that they are ready to strip their constitutional rights down to the bare bone in order to be "protected" by big daddy.

Few are asking the legitimate question of why people are fighting against the US around the world? What are they upset about? Could it possibly be that we are increasingly occupying their lands and grabbing their natural resources? Does it take a rocket scientist to see this? All the talk about our troops protecting our freedoms overseas is pure bloviation.

In the end this total war plan is destroying our economy at home. More than 40 states are now in fiscal crisis. Here in Maine public education is being eviscerated and social programs are next on the block to have their heads removed. But teachers or workers inside of the social service agencies are unwilling to raise their voices and say the obvious -bring our war $$ home so we can maintain social progress. They have been made job scared. Instead, they call for more taxes that an already belabored public rejects out of hand, and they are dismissed as socialists. Thus those trying to preserve domestic tranquility get marginalized. Meanwhile, few are willing to make the connections and speak the truth about the very real, local consequences of endless war.

So as Obama's total war rages overseas it is also being waged on us here at home. Except, because they have us focused 24-7 on the antics of a hapless airplane bomber, we are taking our eyes off the ball that is being ripped right out of our hands. That is the value of Obama, the magician.

We have sadly become slaves, chained to wars, as we watch our very social fabric torn apart. But we remain silent, as we have been programmed to do. And still, in the midst of all that, we boast about our great freedoms here at home as we strip down to our underpants at the airline security check-in.

There is a way out but it takes courage. The courage to speak up, to defend our constitution, to defend social progress, to defend the future generations. Real courage is needed to call for an end to total war.

Related Topic(s): Afghanistan; Congress; Economy; Future; Obama; Oil; Oligarchy; Pakistan; Strategy; Taxes; (more...) Totalitarianism, Add Tags  (less...)
Add to My Group(s)
Go To Commenting
The views expressed herein are the sole responsibility of the author and do not necessarily reflect those of this website or its editors.