Copyrighted Image? DMCA
r. Peter Janney, a psychologist reared amongst Washington's elite in the family of a high-ranking CIA official, undertook a decades-long effort to solve one of the nation's most important murder mysteries.

The result is: Mary's Mosaic: The CIA Conspiracy to Murder John F. Kennedy, Mary Pinchot Meyer and Their Vision for World Peace. Janney, above, described his findings this week on the MTL Washington Update radio show I co-host with network founder Scott Draughon.

Janney's 548-page book is well-crafted, entertaining, courageous, suspenseful, passionate, and so controversial that most media outlets dare not address its themes, although they would doubtless use other excuses if pressed.

By the book's end, I am persuaded that major news outlets worthy of the name owe it to their audiences at least to challenge Janney's impressive documentation.

To set the stage for Janney's book: It would be hard to imagine a more explosive and complex theme in modern politics -- or an independent author better-positioned to provide a best-effort at unraveling the mysteries.

Let's start with the big controversy: Janney concludes that Mary Pinchot Meyer, the beautiful and warm-hearted mother of his best friend, was murdered in a well-crafted hit by the CIA in 1964.

The reason? She was, in Janney's view, on the verge of denouncing as bogus the Warren Commission's then-recent announcement that Lee Harvard Oswald acted alone in assassinating President John Kennedy, who was Mary's lover, friend, and sympathizer in reducing Cold War tensions to advance world peace.

Further, Janney argues that the CIA at its highest levels, including his own father, nearly framed an innocent black man for Mary Meyer's shooting death in the C&O canal pathway in Georgetown while she was walking along her regular exercise route.

Janney shows also that Newsweek/Washington Post icon Benjamin Bradlee had long and compromising ties to the CIA and to the victim. Also: Bradlee was complicit in blocking basic news coverage -- and perhaps in much more sinister activities. 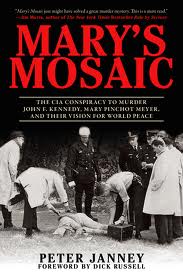 Descendant of a wealthy and politically prominent family from Pennsylvania, she was extraordinarily beautiful, capable, and gracious beginning in her high school years. Kennedy first became attracted to her at a Choate prep school dance in 1936 when she was 15. She published a poem in the New York Times at age 19, portending her auspicious future.

An independent spirit, she married Cord, a prize-winning Yale grad, after he became a World War II war hero. He went on to become a best-selling author, and worked closely with her to become, at age 26, one of world's most famous and influential peace advocates.

The CIA, begun in 1947, heavily recruited such well-bred Ivy grads. Mary divorced Cord in 1956 when she could not bear his revised mission of working for the CIA, where employees kept their activities secret even from their families.

Related Topic(s): Counterintelligence; Dept Of Justice DoJ Failures; JFK Assassination; Johnson Lyndon; Justice Department; One Reason Why Jfk Assassinated, Add Tags
Add to My Group(s)
Go To Commenting
The views expressed herein are the sole responsibility of the author and do not necessarily reflect those of this website or its editors.