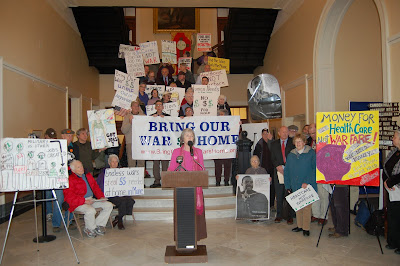 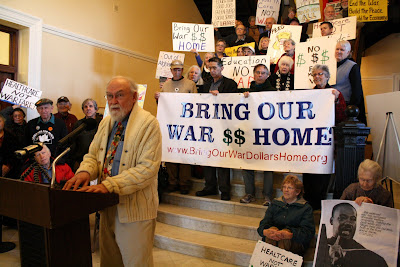 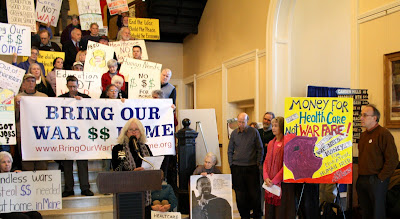 
We had about 70 people join us at the Maine state capital in Augusta for our Bring our War $$ Home campaign kick-off news conference this morning. Some key media turned out so our message will make its way across the state.
Just as I began typing this post my radio was tuned to Maine Public Radio and I heard a news spot about our protest. They quoted Lisa Savage saying that Mainers have paid $2.5 billion toward the wars in Iraq-Afghanistan-Pakistan since 2001.
Each of our speakers did a fine job of talking about the serious cuts facing education, health care, social programs and infrastructure across the state. Sadly up to this point those opposing the $438 million in education and social spending cuts in Maine's budget have called for tax increases to make up the difference. But the Democrat Governor John Baldacci has vowed to veto any tax increases and the state legislature has virtually discounted any "revenue enhancements". Thus no one across Maine has been talking about the real "elephant" in the middle of the room which is Pentagon spending and endless war. Today we broke that silence in our state.
Following our news conference a large group of us went to a legislative hearing room for a combined meeting of the state House and Senate Appropriations and Education Committees which are overseeing a massive slashing of programs. After a series of agency directors stood up and spelled out the cutbacks in their programs the floor was opened for public comments. At that point five of us from across Maine got up one after the other and talked about the creation of our Bring Our War $$ Home campaign before the overflowing committee hearing room.
In my brief statement I said that constituencies are now in competition with one another to save their particular program and this was no way to run a state or a country. I asked them if they could find a way to spend the $2.5 billion that Mainers have contributed to our wasteful wars. I ended with an appeal to all Maine politicians - local, state, and federal - to stand up and really represent their local constituencies by speaking out against war spending.
We can't have guns and butter anymore..... the public must demand that all elected officials find the courage to give voice to our growing opposition to endless war.
(Photos by Peter Woodruff and Roger Leisner)

Related Topic(s): CODEPINK; Democrat; Education; Guns; Homelessness; Issues; Military; Pentagon; Protest; State, Add Tags
Add to My Group(s)
Go To Commenting
The views expressed herein are the sole responsibility of the author and do not necessarily reflect those of this website or its editors.