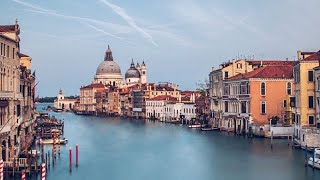 Fish and wildlife have returned to newly clear canals in Venice since the pandemic.
(Image by YouTube, Channel: Bernardo Tabinas TOURistas)   Details   DMCA

THE REPORT ... disposables, China, Vlad and the planet's rebellion

So it's been an interesting couple of days learning how to wash my hands properly (and often), how to avoid close contact with people in the supermarket, remembering not to touch anything, including my face, and mastering the art of properly removing disposable gloves from my hands. Inside out. Snap!

- By the.way ... while on the topic of disposable gloves, I don't think simply dropping them next to your car in the supermarket parking lot is the optimum way of disposing of them. They're like weeds out there, people. There are trash cans outside the store doors. Use them. If there aren't any, tell the manager there should be. But be polite. Lots of stress inside there.

- By the way ... there's a theory making its way on YouTube that the coronavirus is simply the planet, or maybe the Larger Consciousness System, setting things in balance again. A reset button. Physicist/author Tom Campbell notes the skies over China and Europe being remarkably free of pollution since the pandemic and the canals in Venice now flow with clear water filled with fish. Since we're all connected and our species seems to be OK with casually tossing possibly contaminated gloves on the ground, this theory isn't far-fetched.

- By the way ... apparently Vladimir Putin is not immune to the effects of the virus, at least politically. After first announcing that his orchestrated vote to rewrite the Russian constitution to allow him to serve as president for 16 more years would be held April 22, despite the pandemic, he bowed to reality and postponed the vote. Also, Moscow's mayor had said numbers provided by the government on how many people were infected were too low. What a surprise.

- By the way ... where have all the cardinals gone? Our bird feeders, usually resplendent with red visitors, are disappointingly bland so far. An occasional cardinal sprinkled in with the grey and black. Anyone got any ideas?

- By the way ... sometimes things just happen. Like a vegetarian food day not by design. Flax and raisin bran cereal, with banana, for breakfast, grab on the go (not far) veggie burger (mostly brown rice and carrots) for lunch, cauliflower pretzels (who knew?) for a snack (tasty but on the salty side) and individual cauliflower crust pizzas for dinner (not bad). Feeling full and boastfully healthy.

- By the way ... with the rest of the world focused on the coronavirus that was born within its borders, the People's Republic of China, apparently having come through the worst of its crisis, announced the opening of two deep-sea research stations in the South China Sea. The sea is hotly disputed territory because of vital shipping lanes and energy reserves. The U.S. Navy regularly sails through the sea, claiming free navigation lanes. But China likes to claim all of it and the various scientific facilities of the Chinese Academy Sciences, as well as other civilian sounding installations, are part of its campaign to control the sea. It also has established a variety of airstrips, missile shelters and harbors to strengthen its military presence. So, virus, notwithstanding, China's still got its eyes on this target. An appreciative nod, by the way, for this news tip to a former colleague at The Times Herald-Record in Middletown, N.Y., Pete Kutschera, who still tracks such things. Thanks, cap. Or is colonel?

- Finally, by the way ... remember that social media is supposed to be an interactive process. Readers are much appreciated and "likes" are very nice. Non-sarcastic comments as well. But this is about sharing. So spread the news and if you've got an idea for a story (non-Trump) you think deserves attention, please feel free. My email is below. We're all in this together.

Related Topic(s): China; Consciousness; Pandemic; Planet Destruction; Pollution; Supermarket; Vegetarian; Venice; Vladimir Putin, Add Tags
Add to My Group(s)
Go To Commenting
The views expressed herein are the sole responsibility of the author and do not necessarily reflect those of this website or its editors.