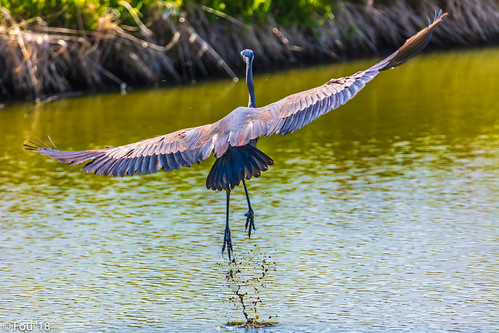 I saw them when going out,Matted down like roosting geeseIn the grass by the lakeWhere they were lying still.Their leader was instructing themIn tones so low no passingEar could hear a single word.It sounded soothing all the same,Although it also seemedLike a conjurer's game.I wondered as I hurried byWhy the need to decompressTo stretch their motley aging framesIn ways that only fashionCould instruct, a shopper's feastUpon whose table esoteric truthsLay like the yoga pants they wore.I might not need to tell youAll were strung-out women,Yearning to adore the sunThat soon would rise to greet them.And while I walked I wonderedWhy tension held them fastIn his brutal arms, whyStress had made a mess of themAnd how often did they comeHere to find release of sorts.

Soon I reached the reedy swampThat lay at the lake's edgeWhere I stopped to watchA heron balancing on one leg.No arm was raised, no faceTurned up, she stood utterlyAlone, a Giacometti without a traceOf angst or need to join a bevy.When I returned and passedThe swamp, I jumped in shock,The reeds exploded with her rise,The massive blue wings beating airAround my startled little head,Her heat so hot she roseHigh into the distant treetop.I stood transfigured, a smallCreature, startled into awe.

When I came again to whereThe group of women had lain Only one remained, standing facing east,Hands joined in supplication to the sun,Begging for a bit of life,As if she were the sun god's wife.

I found it very sad to seeSuch anxiety, a desperate woman's pleaFor what I cannot say but thinkMay be some kind of calming grace.

I guess I'd say the gods are fey,They only come when left to be,Alone in their own company.

Related Topic(s): Anxiety; Class; Fashion; Poem; Stress; Women; Yoga, Add Tags
Add to My Group(s)
Go To Commenting
The views expressed herein are the sole responsibility of the author and do not necessarily reflect those of this website or its editors.