Bernie Sanders has been made into a non-person, and his proposals routinely distorted, because the corporate media want Americans to meekly submit to the Race to the Bottom. 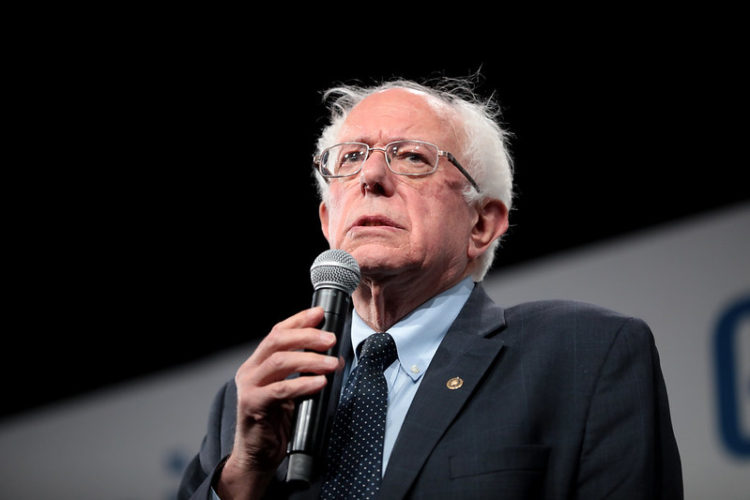 "The system was suffering a crisis of legitimacy: nobody believed the official narrative anymore."

Bernie Sanders' campaign has finally gone full-throat with the obvious: the Democrat-aligned corporate media have thrown all journalistic principles to the wind to impose a "Bernie Blackout."

How can someone who was the most popular politician in the nation in 2017 be made into a non-person? It's all intimately entwined with the multiple crises afflicting late stage capitalism.

In the absence of massive, grassroots movements, corporate voices always drown out all the others. Capitalist ownership of the media allows the rich to frame their own worldview as the political "center," thus relegating contending ideologies to the "extremes" of left or right. In this sense, "centrism" is nothing more than the political position of the corporate owners, who construct media versions of reality that make corporate-concocted policies seem the most logical, commonsensical and socially responsible approach to the world's problems. As long as the rich can sustain broad public trust in the "truth" of their "journalistic" products -- newspapers, electronic newscasts, books and other media created by professional operatives directly answerable to rich owners widespread revolt against the corporate order is unlikely.

"Capitalist ownership of the media allows the rich to frame their own worldview as the political 'center.'"

Most people in all societies want to be perceived -- and to see themselves -- as sensible, responsible and knowledgeable. When polled on political questions, they are eager to give the "correct" (corporate-endorsed) answers. Only the most marginalized, alienated and systematically demonized sectors of society will consistently buck the corporate narrative.

In the United States, the biggest historical resistance to the corporate (rich white man's) worldview has come from Black America, a besieged people with a unique social perspective who were compelled to create their own media in desperate defense of their collective humanity. However, the demise of Jim Crow apartheid and subsequent absorption of many of the "best and brightest" Black minds into corporate service, has dulled Black defenses. After two generations without a mass, grassroots Black movement a politically desolate period briefly interrupted by the "Black Lives Matter" mobilizations of 2014-15 -- African Americans are also more likely to give the "correct" answers to corporate media surveys.

But not the youth of all races, who know that capitalism, as they experience it, promises them nothing but endless austerity and war. Majorities of young Americans now embrace a version of "socialism" that is actually merely a less vicious capitalism, made kinder by a comprehensive system of social supports similar to the "social democratic" order in northwestern Europe. But late stage capitalism is relentlessly eviscerating the European model and has no intention of allowing a replica to be erected in the United Corporate States of America, the global headquarters and armory of the Lords of Capital.

"The biggest historical resistance to the corporate (rich white man's) worldview has come from Black America, a besieged people with a unique social perspective."

Late stage capitalism is beset with accumulated contradictions that allow it no option but to conscript the whole world into a Race to the Bottom. This vast army of precarity must include many of the previously imperially-privileged classes white people whose entire personal identities are entwined with empire and their right to share in the spoils of conquest. As rulers of the oldest and most successful white settler state, U.S. oligarchs cannot find the language to tell their white subjects that the implicit imperial contract has been terminated -- a fact that should have been obvious over two generations of deindustrialization.

In addition to being eclipsed on the world stage by a Chinese command economy that continues to expand even when the rest of the world is in deep recession, the Lords of Capital face an internal crisis that is both general and racial. American rulers must convince a multiracial imperial population to take its place in the Race to the Bottom including a white majority that thought it was sitting on top of the world.

"U.S. oligarchs cannot find the language to tell their white subjects that the implicit imperial contract has been terminated."

The megalomaniacal hustler-capitalist Donald Trump jumped into the systemic late capitalist contradiction with racist, gleeful abandon in 2016. Speaking the plain language of white supremacy, Trump promised to put "America First" and avoid entanglements with the darker races of the world -- the "sh*t-hole" people. By throwing red meat to his fellow racists, Trump massacred his dog-whistling opponents in the established Republican Party.