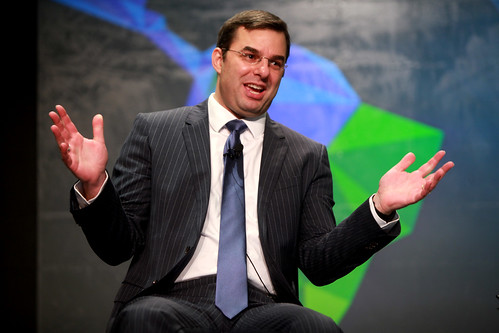 On April 28, US Representative Justin Amash (?-MI) launched a presidential "exploratory committee." He wants to take on Republican incumbent Donald Trump and Democratic nominee-apparent Joe Biden this November as the nominee of the Libertarian Party.

If this was a "straight news" story instead of an op-ed, the first paragraph above would be known as the "lede" -- an introductory paragraph summarizing the most important facts the story covers.

And if this was a straight news story, that opening paragraph's author -- me -- would also be guilty of committing the supreme journalistic sin. To "bury the lede," the good folks at Merriam-Webster tell us, "refers to hiding the most important and relevant pieces of a story within other distracting information."

What's important, relevant, and missing from my lede paragraph (and, so far, the lede paragraph of every "straight news" story I've seen on Amash's campaign launch)? This:

For the first time ever, there's a sitting member of Congress whose party affiliation is "Libertarian."

Amash formally left the Republican Party on July 4, 2019, becoming the only bona fide independent member of Congress (the US Senate's two supposed "independents," Angus King of Maine and Bernie Sanders of New Hampshire, caucus with the Democratic Party and are Democrats in all but name).

Amash has displayed libertarian ideological leanings since his days in Michigan's state legislature, and more prominently and combatively since his election to Congress in 2010. But he's kept the party dedicated to that ideology -- the Libertarian Party -- at arm's length.

Since its founding in 1971, the Libertarian Party has won thousands of local elections and put a few state legislators in office on its ballot line, but Congress and the White House have always proven beyond its reach.

One is branding. If the Libertarian Party nominates Amash, it will be the fourth time in a row that we've nominated a "recently Republican" candidate instead of choosing someone closely associated with our own party. That kind of record promotes the false and damaging perception that Libertarians are just "Republicans who smoke dope."

The other is timing.

Related Topic(s): Election 2020; Justin Amash; Libertarian, Add Tags
Add to My Group(s)
Go To Commenting
The views expressed herein are the sole responsibility of the author and do not necessarily reflect those of this website or its editors.