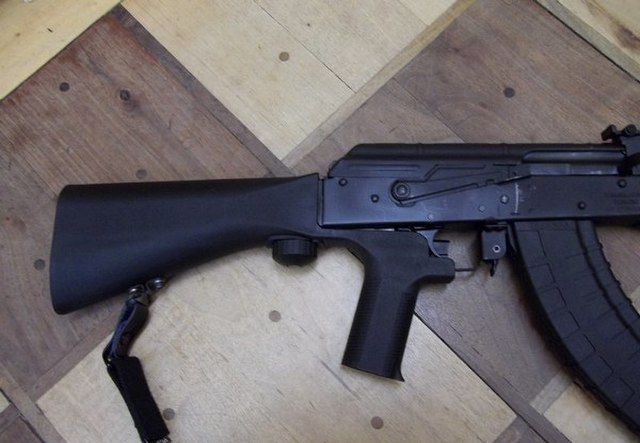 Every time there's a "public mass shooting" (defined by the Congressional Research Service as an incident in which four or more people are indiscriminately killed, not including the shooter or shooters, in a relatively public place) in America, the usual suspects climb atop of the pile of bodies before they're even cold and start doing the funky chicken to the tune of "gun control, gun control, this wouldn't happen if we just added one more gun control law to the hundreds of gun control laws that we already have."

They're always wrong, their political posturing is always ghoulish and disgusting, and any policy outcomes they achieve are stupid and pointless at best and an outrage against the rights of the people at worst.

This time, it looks like the former. US Senator Dianne Feinstein (D-CA) is pushing legislation to ban "bump stocks," devices which allow one to fire a semi-automatic weapon (which fires one shot per pull of the trigger) at rates not unlike those of an automatic weapon (hundreds of rounds per minute for as long as the trigger is depressed, unless the gun runs out of ammo, or it jams, or its barrel melts).

"Bump firing" devices are pretty simple. They're based on holding the trigger finger in place and using the recoil of the weapon to, you guessed it, bump the trigger against the finger repeatedly.

Because they're so simple, anyone who really wants one will get or make one, ban or no ban. And, because they make a weapon's fire incredibly inaccurate and difficult to control, hardly anyone DOES want one for any purpose other than impersonating Rambo in YouTube videos.

If the Vegas shooter did use a bump stock, as seems to be the case, it probably saved some lives. A reasonably proficient marksman would likely have killed more people with aimed shots from a semi-automatic, or even bolt action single shot, rifle under the circumstances (thousands of people packed together, less than 500 yards away, with a clear line of sight and no counter-sniper fire to worry about).

Republican politicians and the National Rifle Association are already jumping on the bump stock ban wagon. I'm not surprised. There's no "there" there. The whole idea is even dumber, and less pernicious in effect, than the 1994 ban on "assault weapons" (defined as guns that people like Dianne Feinstein think look scary).

This stump stupid idea has to be fought on principle, of course. "Shall not be infringed" means exactly that, and politicians should never be rewarded for publicly rolling around in the blood of murder victims while demanding that we sacrifice our rights to their ambitions. But I won't personally be losing any sleep over Feinstein's stunt.

Related Topic(s): Guns, Add Tags
Add to My Group(s)
Go To Commenting
The views expressed herein are the sole responsibility of the author and do not necessarily reflect those of this website or its editors.