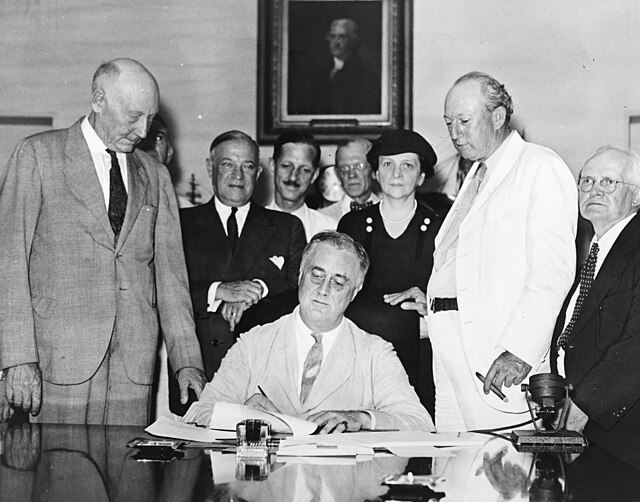 Probably the most important single legacy of what happened in the period of the Great Depression and the New Deal was the establishment of the Social Security, the federal program that today pays benefits to 63 million US elderly, disabled adults and dependent children left by a deceased bread-winner. That's one-in-six of all people in this country.

President Franklin D. Roosevelt and his Democratic majority in Congress, pressured by socialists and by a militant labor movement, created a program that guaranteed at least enough income for most Americans, once they were too old to work anymore, that they wouldn't be forced to beg in the streets or become such a burden on their children that they would be bankrupted caring for their parents. More importantly, but perhaps less obvious, they for the first time institutionalized the concept that government has a responsibility for the broad welfare of the nation's people.

That program happened because of a mass movement on the left for action to assist a desperate population. We need a movement again now because the Social Security program is under threat, but also because we need more than just the existing program. And fighting for Social Security can be the focus of a mass movement that, by bringing a majority of Americans together on that one issue, it can pave the way for bring them together on a range of issues.

For decades indeed since its creation Social Security has been under ceaseless threat by the right and by corporate America, which have correctly perceived Social Security as a wedge introducing a very dangerous (to them) socialist idea into a polity that has assiduously banished that ideology from acceptable public discourse. If the public ever realized that SocialSecurity, upon which some 43 percent of the elderly depend entirely for all of their retirement income, while another 19 percent rely on it for half or more of their retirement income, could be a model for a much more civilized society, they might go further. They might start imagining a society that should be more fully protecting the elderly and disabled, one that should be providing health care as a right to all its citizens, one that should provide a first-class education the nation's children, regardless or race or economic status, and one that should protect the whole population from environmental risks to health and from corporate exploitation. And who knows else what Americans might start demanding!

For the rest of this article by DAVE LINDORFF in ThisCantBeHappening!, please go to:https://thiscantbehappening.net/social-security-is-the-key-to-progressive-change-in-america/

Related Topic(s): Social Change; Social Security; Social Security Cuts; Social Security Privatization, Add Tags
Add to My Group(s)
Go To Commenting
The views expressed herein are the sole responsibility of the author and do not necessarily reflect those of this website or its editors.