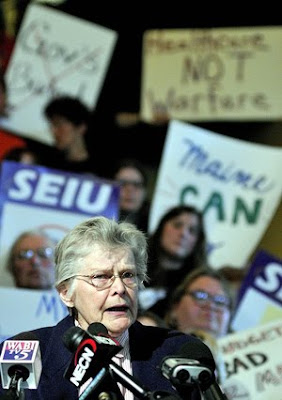 (Image by Unknown Owner)   Details   DMCA
My sign is the fuzzy one at the top right of the photo - Healthcare Not Warfare
Peter Woodruff and I went to the state capitol in Augusta yesterday to join a rally that drew about 200 people to protest against more social spending cuts. We stood on the stairs behind the speakers podium holding our signs and noticed some of the organizers telling their photographers to avoid our signs when they took snaps of the scene. Peter's sign, not in this photo above, read "Endless war steals $$ needed here in Maine." Quite a number of people thanked Peter for holding that sign as we stood around prior to the rally.
About 200 people were at this event, mostly senior citizens from AARP and African immigrants brought by the NAACP. In addition there was a sprinkling of union people and homeless advocates.
The governor's latest cuts package calls for knocking almost 30,000 people off the state Mainecare health program for those who can't afford to purchase a private insurance policy. In addition his budget calls for deep slashes of General Assistance (offered through local municipalities) and Temporary Assistance to Needy Families (TANF). These cuts would effect tens of thousands of people in a state that only has a population of about 1.2 million people.
The proposed budget by the governor also calls for $200 million in tax cuts that would feature reductions in the top tax rates and changes in the estate tax on the richest Mainers. These tax cuts for the wealthiest are likely to pass since the Republicans now control the state legislature. But even some Democrats are going to support them. At a recent town meeting here in Bath my State Senator Seth Goodall, a Democrat, after complaining about the governor's planned cuts acknowledged under questioning from the audience that he supported the tax cuts.
So the hypocrisy, and double dealing, here is mind blowing as some Democrats help get the public fired up about the governors budget and then will slip in the back door and give tax breaks to the fat cats who don't need the help. Many Democrats are thus just using the public outrage to help create the climate to get their party back into power but in the end they are still playing the same shell game.
The problem though for me is that the organizers of this event yesterday were not offering the people who came to the rally the whole picture. They are getting people all fired up, but what are the solutions that the organizations are offering their constituencies? Don't cut social programs, they say. OK, that's good but where will the money come from to keep them funded? Don't give tax cuts to the rich. OK, good, that is right. But then the Republican dominated state legislature is going to pass these tax cuts, with some level of help from Democrats. So what then? The answer: nothing. No other demands, no other suggestions for sources of funding for social programs in Maine and beyond. Done.
We know that the combined debt of the 46 states now in fiscal crisis comes to $130 billion. Just this year alone the Pentagon will spend $170 billion on our wars in Iraq-Afghanistan-Pakistan-Libya (that is in addition to the $700 billion plus annual military budget). Just one year of war spending could wipe away the entire debt of all 46 states. That would mean no teacher lay-offs, no lay-offs of police and fire fighters. It would mean roads and bridges could be fixed, transit systems could be funded, schools and libraries not closed, and social programs not shut down.
But yesterday, with the exception of the signs that Peter and I held up when we squeezed our way into the group behind the speakers platform, not one mumbling word was heard about war spending as an alternative to cutbacks.
After the rally I went up to the woman speaking in the picture above. She is Silver Moore-Leamon, president of the Maine Council of Churches and I thanked her for her good words which included calling budgets "moral documents". But, I said, it would be nice next time if you'd include one more "moral" question - war spending. Nothing will change I told her unless and until we are able to bring our war $$ home. Yes, she said, that is true. But if I get into those specifics I will lose support for our message, she told me. In other words, Moore-Leamon didn't want to offend anyone, particularly donors on Sunday who put money into church collection plates. She did admit to me that churches in the state were negligent in not speaking out more forcefully on the war issue.

Last night Peter and I went to do our weekly radio show at WBOR in Brunswick. He showed me the USA Today newspaper that had a front page story announcing that 59% of the American people want us home from Afghanistan. (By the way, Peter taped Moore-Leamon's speech and we played it on our show - and filled in the holes.)

My hope is that the leaders of the Maine Council of Churches will take note of this poll. It might give them more confidence to add military spending to the list of "moral choices" at budget making time.

What would Jesus say?

Related Topic(s): Afghanistan; Budget Deficit; Budget Shortfall; Democrat; Healthcare; Military; Moral Values; Morality Morals; Organizer; Pentagon; (more...) Rally, Add Tags  (less...)
Add to My Group(s)
Go To Commenting
The views expressed herein are the sole responsibility of the author and do not necessarily reflect those of this website or its editors.